Well, it is 11:29am and I am curled up on my couch with my laptop, a hot mug of coffee, and my two pups beside me. Must say I'm pretty happy right now. :)

Yup, work got canceled. Because it snowed. Which is kind of funny to me. Now I will give them some credit...it is a lot of snow. Probably 5 inches or so (at least that's what it looks like). But if I were in Indiana right now, the roads would be completely clear and the city cleanup crew would have turned the beautiful crisp layer of snow into a pile of brown icky mush hours ago. But not in North Carolina. Nope. The roads are barely commutable here in Raleigh. The only way to possibly travel above 15mph is to find the tracks of some earlier car on the road and follow them as closely as possible. Even then, you're looking at top speeds of 40-45mph. On the interstate.

And how do I know this? Because I spent an hour and fifteen minutes on the road this morning. I woke up and found out we had a two-hour delay (and felt like I was back in high school), so I slept in for a while, then decided to go to work half an hour early to make up some time I'm going to miss later this week. It was a long trek, and I passed probably 5 cars that had driven off the road, but I finally got there. When I pulled in found that there was only one other car in the parking lot. Hmm. So I went in and headed up to my office when my cell started ringing. I answered it just as I walked in and set my stuff on my desk. It was Kristin.

"Did you get the message?"

"The Durham office [our office] is closed today."

Are you KIDDING me?? They sent out an email ten minutes before I got to work (2/3 through my trip) saying that the office was closed. Sigh.

So I loaded my stuff back on my shoulders and headed back to my car. And drove all the way back home. Slightly annoyed that I'd driven so far in such horrible driving conditions for no reason, but still thrilled to have the day off.

So here I am. I think Maggie and Rogan are pretty excited to have me home. Especially Rogan. She normally stays in her kennel all day (until she stops destroying things when we're not around). They've already pranced around in the snow and played inside for a while. Much better than spending a day locked up.

Alright I'm off to do some things I've been wanting to do. Such as print out pictures for photo frames, work on our wedding scrapbook or photobook, etc. Fun stuff. :) 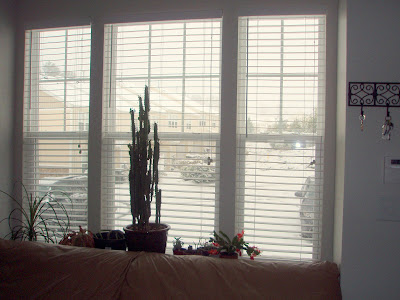 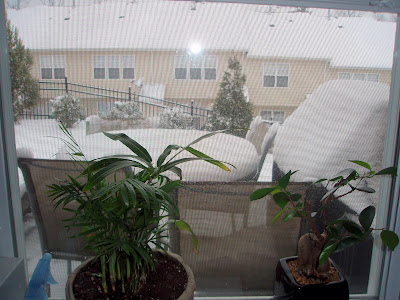 The most snow I've ever seen in North Carolina. From inside my house. I wasn't feeling the urge to go back out there for a picture. 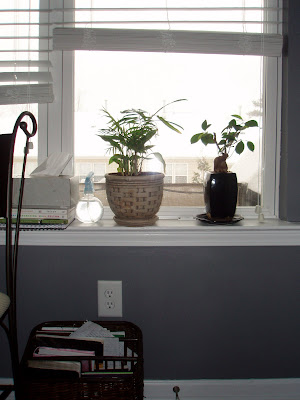 A picture I had to share because I thought it looked like something out of a Martha Stewart catalog :-P 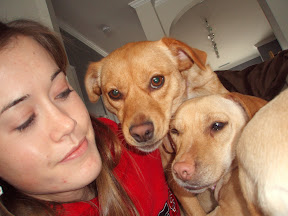 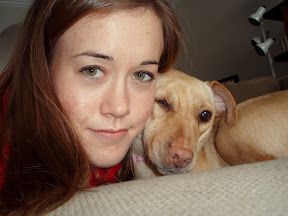 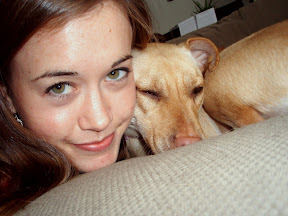 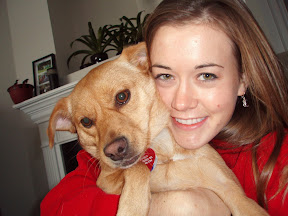 Don't let their looks of annoyance fool you...my dogs are glad I'm home.
Posted by Kara @ Just1Step at 11:29 AM