Any of you who know me well in-person probably know that I have a gross habit that I am not proud of.  It's been a problem since I was a wee little girl, and I've tried countless times to stop.  The habit leads to disappointed feelings toward myself along with extreme self-consciousness (at least for a particular part of my body).  Not to mention that it is unhealthy and has probably gotten me sick on numerous occasions.

Yes, you guessed it.

I am a nail biter.

Sometime last fall, my friend Kristin and I both bought a 75-Minute Summer Twist Mani/Pedi from LivingSocial.   At the time I was resisting my habit fairly successfully, and so I thought it was a practical purchase (albeit a treat).  Well, not long after that my habit took over full-force and my finger nails became ugly little stubs.  I told Kristin that as soon as I grew my nails out again, we would go do our mani/pedi.  Months later, I'm still telling her the same thing.  I decided it was high time to do something about my issue before my LivingSocial deal expires. 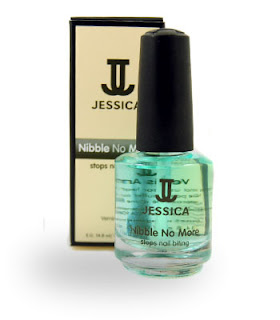 {via}
Nibble No More is simultaneously one of the most horrible and one of the most wonderful things in my life.  It tastes absolutely awful. It's made from cactus extract and has a crazy bitter taste unlike anything I've ever tasted before.  I've tried all the typical bad-tasting polishes to put on your nails, and Nibble No More trumps them all.  It goes on easily and is invisible once dry.  It spreads quickly with contact and is hard to wash off.  If you even touch your lips to your finger for a quick second, the taste will have transferred. And then you will taste it every time you lick your lips until you scrub them a million times to wash it away. This stuff is nuts. But wow does it work.  With most of the bad-tasting polishes, I can just ignore the taste and continue biting away. Not with Nibble No More.  Nibble No More wins every time.

So the Nibble No More regimen is starting today.  At least twice a day I will be applying it to my nails.  There will probably be a lot of gagging and grimacing going on.  Please don't laugh if you happen to be standing by when I ignorantly stick one of my fingers in my mouth.  And don't be surprised if I run for the nearest faucet for a drink of water.  Because yes, this stuff is that bad.  It's full-on self-torture.

BUT.  In a month or so I will have longer nails...nails worthy of a manicure.  Not to mention I'll also get a pedicure (glorious).  And it will all be worth it. :)
Posted by Kara @ Just1Step at 1:38 PM

Email ThisBlogThis!Share to TwitterShare to FacebookShare to Pinterest
Labels: {Miscellaneous Stuff I HAVE to Tell You About}, {My Life}