Last Friday morning, it suddenly dawned on Dave and me (via a gchat) that we hadn't been to visit his parents in Charlotte in quite some time.  We also realized that there weren't any good opportunities coming up, and that the prime weekend would have been the weekend right in front of us.  So yup, we cancelled a few plans, packed up the toddler and pups, and off to Charlotte we went. 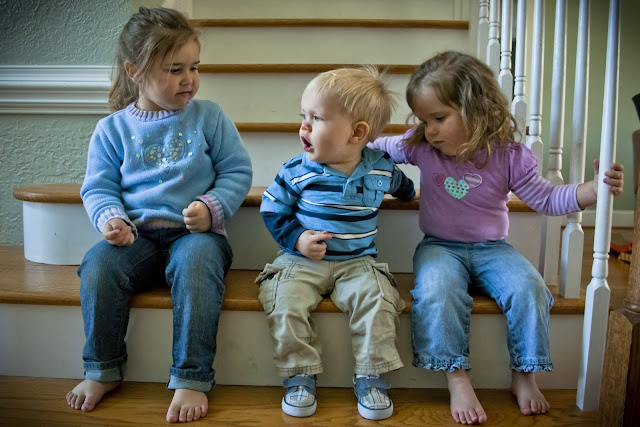 It was a pretty busy weekend with lots of outings and driving.  Lots of fun, too, though, with yummy restaurants and some antique shopping.  Upon arriving back home on Sunday afternoon, I found myself feeling draggy, and as of Monday morning I was pretty much worthless.  I knew from the moment I woke up that it was going to be a sick day.  Unfortunately, I had my yearly dermatology checkup set up for that morning, and I didn't want to have to reschedule.  So I dragged my butt out the door and got some Starbucks on the way to make the trip worthwhile.  I shoulda stayed home.  The doc found a slightly suspicious mole on my hip and decided to cut it off.  Which, ya know, was a wonderful addition to my already sicky body.  Sigh.  Oh well.  It's just a body, just a mole, just a little wound.  I have a different perspective now that I'm a momma...I'd rather be safe and have a cut in my body than sorry and risk the mole turning dangerous.  At any rate, a three-hour nap followed by an afternoon in bed helped with the cut pain and sickness a lot.

Krew is growing oh so quickly.  Dave and I are amazed daily with the things the little boy understands, repeats, and tries on his own.  Last week I had him sitting on my lap while I was editing pictures of him on the computer, and all of a sudden he pointed at his picture on the screen, quickly pointed at his own chest, and exclaimed, "Dis!!" (this!).  My jaw dropped open.  I flipped to another picture, and said, "Krew, who is that??"  Again he pointed at his chest and exclaimed "Dis!!"  He did it several times for me, and also later for Dave.  We were both so impressed.  It's so amazing to see him learning his own identity, realizing he has a particular face, and that he can look at himself in a picture and know that it is him.  It just blows my mind.  At less than 13 months old.

Speaking of 13 months old, today is Krewson's 13-month birthday. :)  To celebrate, he took the liberty to pull two full boxes of q-tips out of our bathroom drawer this morning and empty them all over the floor.  It looked like a q-tip bomb had exploded.  Pretty impressive, I must say. 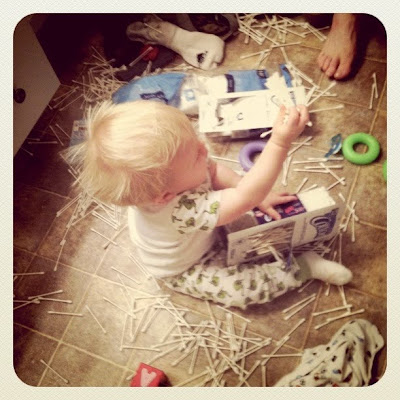 He also now knows what his shoes are.  You say, "Krew, where are your shoes??" and he bends down and points to them.  If you ask the question while he's sitting in a highchair, he'll stick his arm down through the leg hole and reach down to get as close to his feet as possible before he points.  So cute.

He began saying "Uh oh" this past weekend.  It comes out more like "Uh uh" instead of "Uh oh", but it's still very sweet to hear him say.  His favorite thing to do Friday night was throw something off the couch and proclaim, "UH uh!!"

Back to me, I'm fortunately feeling better today and went back to work, although I'm still much more lethargic than normal.  Hopefully I get back my energy soon, because I've got a full weekend ahead.  My parents are visiting starting Thursday evening, and on Saturday I'm running my first 10k followed by an afternoon helping to restore a home for the local rescue mission.  The plan is for us to hang siding on the house.  If it's anything like volunteering for Habitat for Humanity, I will have a good time.

Alrighty the boy is screaming for me to either go give him more food or let him out of his high chair (it's anyone's guess as to which it is), so I will catch you all later. :)
Posted by Kara @ Just1Step at 6:37 PM