I thought it was about time for another Krewson update. :)

Krew will be 14 months next week.  Crazy!!  He is such a wonderful joy in our lives.  In all seriousness, he brings me and Dave to laughter at least five times a day.  He just does the silliest, cutest, and most ridiculous things.

This morning he cracked both of us up when he found Dave's large exercise ball in our bedroom and proceeded to roll it into our bathroom (and yes even he made it through the doorway) screaming "Nahnahnahnahnahnahnahnahna!!!!" the entire time.  His screams meant that he wanted us (who both currently share the name "Nahn") [ok, he actually really prefers Dave over me right now, so he probably just wanted Dave] to play ball with him.  And he wanted us to do this using a giant inflated ball that was nearly as tall and about three times as wide as his little body.  It was soooo cute.  Just for kicks I took a break from getting ready for work and rolled it with him a few times.  During the second roll, it knocked into his little belly, and after a split-second of wobbles he toppled to the floor.  No worries. He jumped right back up and was ready to go again.  He's resilient like that. :)

His vocabulary is now growing like crazy, although I think Dave and I are the only ones who can understand most of his words.  Some of his favorites right now are ball ("buh"), uh oh ("auh-oh"), and "nahn", which apparently means all of the following: mom, dad, give me that, I want food, please, pick me up, come here, play ball with me, and get me out of my crib right now.  This ("dis!") and that ("dat!") are still staple words, and he'll occasionally throw in a "dada" for special effect. I've also heard him say bubble ("buhb"), red fish ("reh-ish"), yellow fish ("yeh-ish"), and Dave has heard him say book, dog, and a couple other words (that I can't remember since I wasn't there).  Krew understands when we tell him to sit down, or ask him where his milk is, or tell him to find his belly button.  It's so fascinating to see him developing into a little person.

He's now officially walking about 97% of the time.  Occasionally he'll crawl a short distance, but more often than not he'll stand up to walk to wherever he's going (even in situations where I myself would have crawled instead).  And he's getting quick.  I love it.

He was sick with roseola last week, but thankfully that's all over and he's back at daycare.  Juggling taking care of him at home while still trying to work was a bit exhausting.

His absolute favorite thing to do right now is to be in his daddy's arms, throwing a ball.  He chucks it at the ground, then Dave retrieves it (while still holding him) and hands it back to him.  And he chucks it again.  Over and over and over.  I am not good at this game.  Perhaps it's due to my absolute lack of enthusiasm for sports or anything sports-related, but I can handle throwing a ball for about, oh, two seconds.  And then I'm done.  Tired of it.  Ready to move on.  Dave seems to be able to do it all day long.  Which he apparently did last week while Krew was sick.  Which now makes him Krew's official favorite person in the whole wide world.  Seriously.  I cannot compare.  On Sunday, Dave went to play frisbee, and after he left Krew just stood at the front door whining.  So I took Krew into the house and played some ball (yawn) and as soon as I stopped, his little legs pitter-pattered straight back to the front door, where he began whining again.  So I took him back into the house to play ball again (yawn again).  And as soon as I stopped?  Back at the front door, whining.  Sigh. Over and over.  And then, later during his bath, out of nowhere he suddenly started whining, "Dadadadadadadadada" and looking like he was about to burst into tears.  It really was quite sad.  So I had to distract him from his longing for his daddy once again by acting totally against my nature and trying to mimick some of the boyish daddy things Dave does with him.  I must have done well enough, because the "Dadadadada"s stopped.

Despite his incredible love for all-things-ball, Krew also loves himself some music.  This brings so much joy to my heart.  He will now very frequently go to the tv and request (through gestures, grunts, and "nahn!") that he wants us to put in a PraiseBaby dvd for him.  And then he will wiggle and dance and move his arms all over the place as he dances to the praise songs.  I adore every moment of it, and could stand and watch him for hours.  What is so neat about it, as my mom pointed out the other night, is that he's not doing it for show or for attention.  He never looks to see anyone's reactions.  He's simply in his own little world, moving to the music as he feels led.  It's so uninhibited, innocent, and precious.  I love it.

Here's a couple pictures to wrap things up: 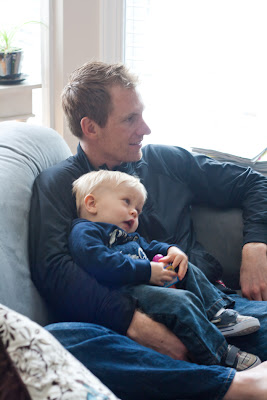 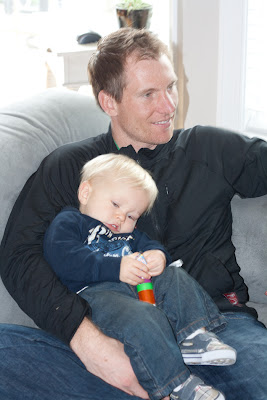 tv watching and cuddles with Daddy 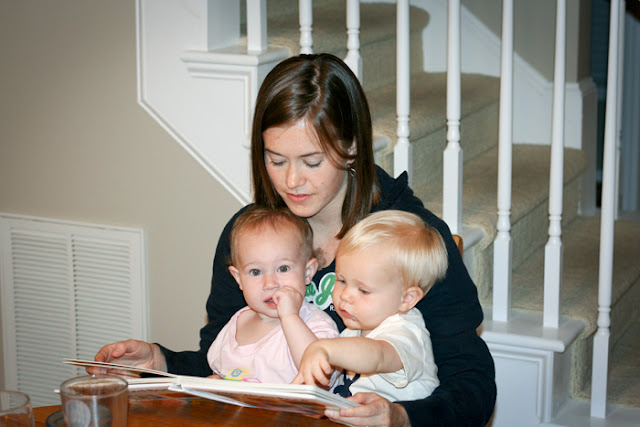 book time with Mommy and Ellie 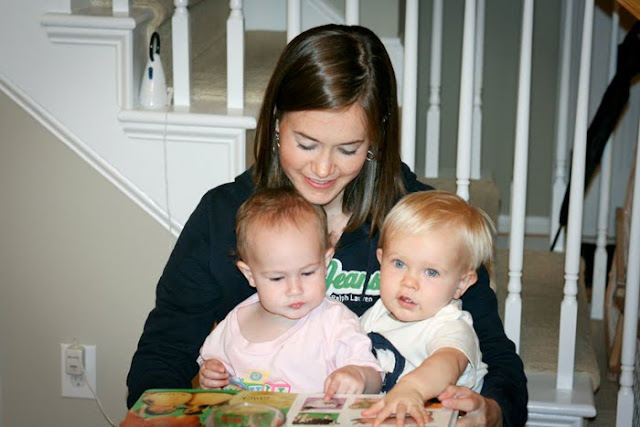 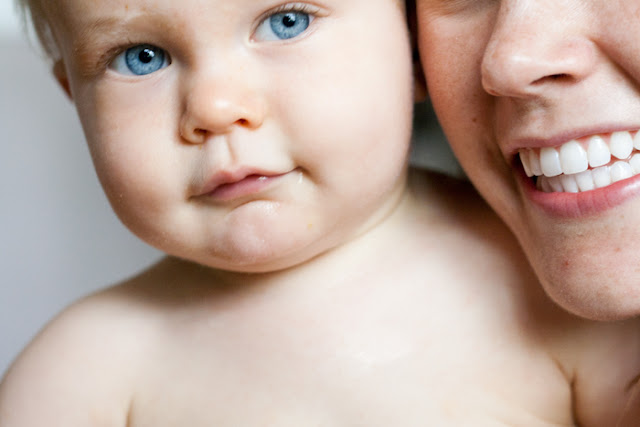