Krewson is 23 months old today.  Just crazy.  One more month till we have an official 2-year-old on our hands!!

I think the biggest development for Krew over the last two months has been his language.  He now repeats EVERYTHING we say and has a rather impressive vocabulary.  He strings two and three words together more often than not.  He's even started occasionally using articles ("the", "a", etc.) which just started in the last week or so.  His word pronunciation isn't the greatest yet, but I know that will develop with time.  For now we just love listening to him chatter and having the ability to hold conversations with him.  Sometimes he says things that we don't understand, which can be frustrating, but more often than not we're able to figure out what he's saying and respond. 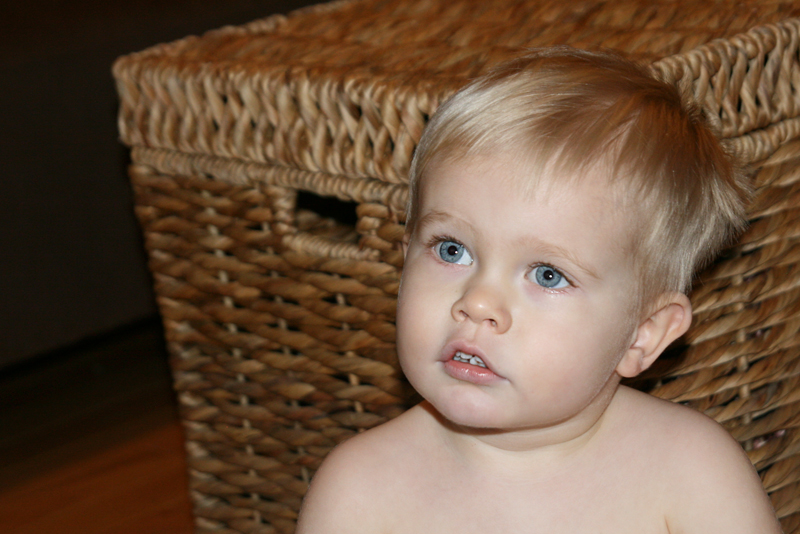 We've also been working on learning numbers, shapes, letters, and colors.  He absolutely loves to count to ten, over and over and over.  Also loves to sing the ABCs.  I try to practice his colors with him as often as the opportunity arises, but they don't seem to be clicking very well.  He can sort objects into groups based on colors, but he can't seem to keep track of the color names.  In fact, he just says that every color is red.  Apparently his NC State-fan daddy has trained him well.

He loves his trains, cars, trucks, buses, and airplanes.  Frequently while driving we'll hear "truck!" from the back seat.  Then "BIG truck!"..."BUS!"...."Ooooooh BUS!".   He loves to play with his toy train set that he got for Christmas, along with all his toy cars and trucks. 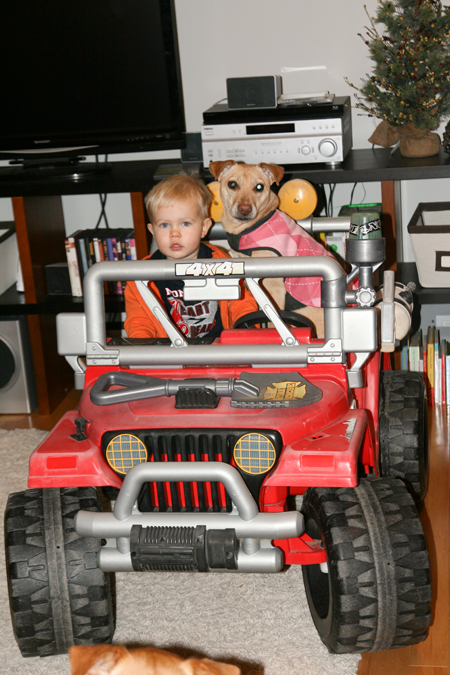 He also loooooooooooves to color right now.  His favorite thing to use is his markers, but he'll sometimes go for his crayons, too.  We had to have a few teaching situations for him to learn that we only color on paper and not on the wall or table, but he seems to have it pretty down-pat now.

Being outside is still one of his favorite things to do.  He'll just go in the backyard and walk around, picking up objects and kicking a ball. Also really enjoys his sandbox.  Thankfully we've had a very mild winter so far, so he's been able to go outside quite a bit.  When he's not able to be outside, he enjoys throwing balls and frisbees around the house.  He's gotten pretty good at shooting into the basketball hoop he got for Christmas, and he's learning the "proper" way to throw a frisbee thanks to his daddy. 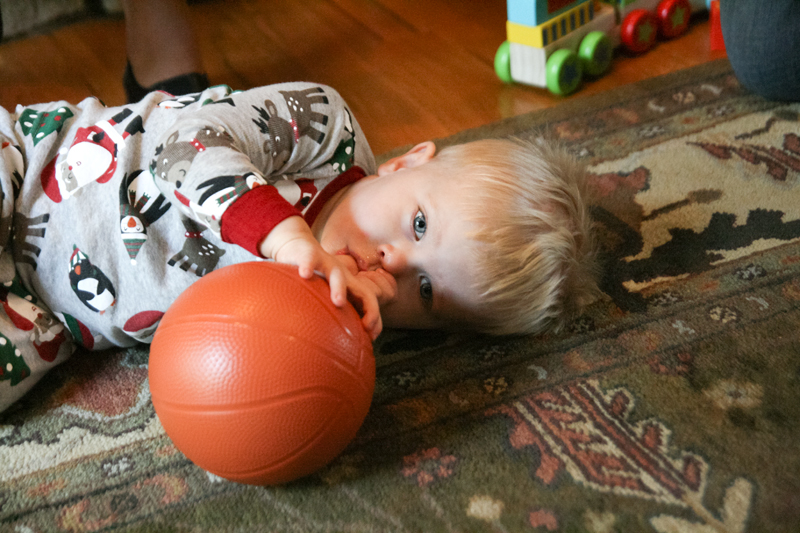 He has always been a bit more on the "thick" side...very solid, heavier than you would expect him to be by looking at him, with a big belly in proportion to his body.  But recently Dave and I both noticed that his body seems to be thinning out.  His belly is shrinking.  He feels easier to hold, more long and less thick.  It's so weird.  I pick him up in the morning, and I can totally tell he's changing.  He feels like a monkey instead of a teddy bear, if that comparison helps at all. :) 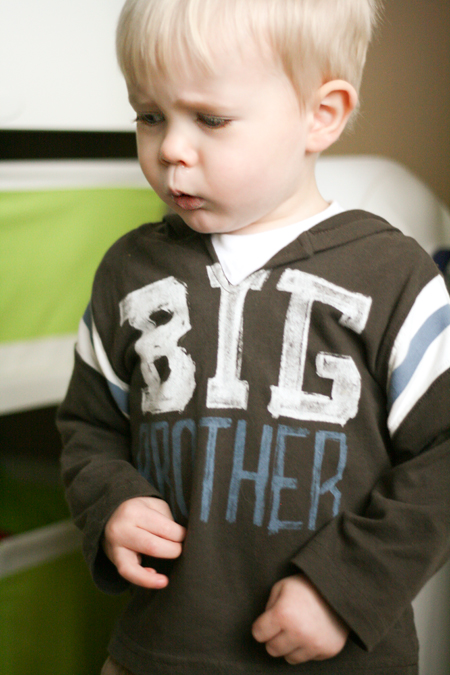 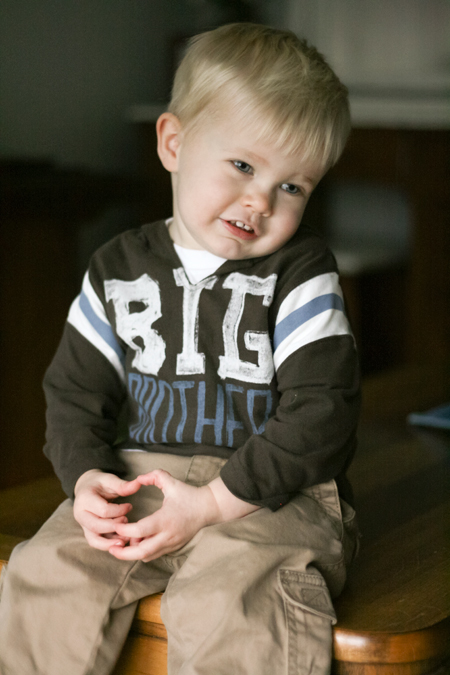 Of course maybe all that body-thinning is because the kid runs a million laps around our house daily.  No joke.  He all of a sudden takes off and runs lap after lap after lap.  Nearly every day.  A lot of the times he requests that we run with him.  "Daddy!! Mommy!! RUT!!!"  ("Rut" = "run" in toddlerese.)  Then he'll shout "STOP!" and we'll all stop.  Then he'll shout "GO!" and we'll all go.  Round and round and round.  Till Dave and I are tired and begging for a break.

In terms of clothes, he's wearing 18-month pants, 18- to 24-month shirts, 18- to 24-month pajamas, size 6 shoes, and size 4 diapers. It's crazy to me that his feet haven't grown in what seems to be months. I'll be curious to find out his height and weight stats at next month's doc appointment. 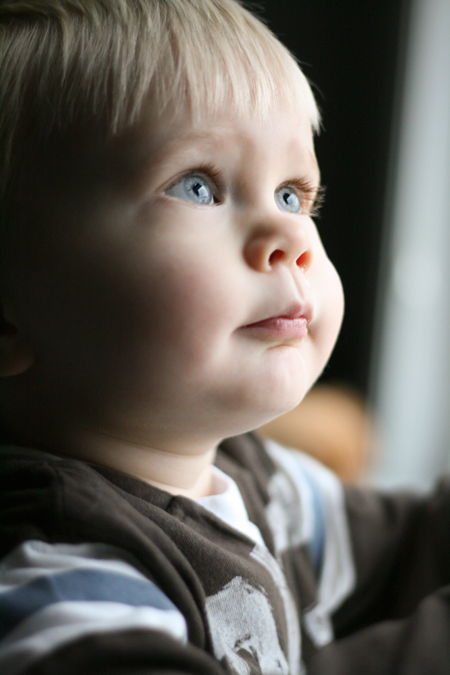 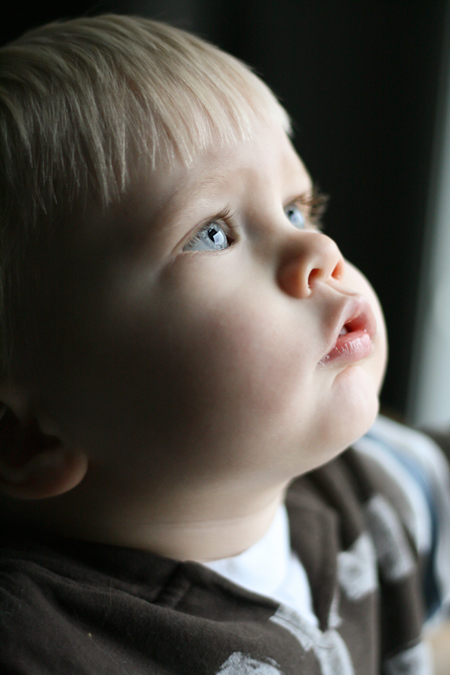 He still prefers daddy over mommy, grandpa over grandma, and uncles over aunts.  (Still makes me sad.)  He still loves music, singing, and dancing (yay!).  Favorite movies are still...once again...Horton Hears a Who (he has the sound effects for the first ten minutes memorized) and Blue's Clues (he sings and dances along with the songs).  Veggie Tales has faded away a bit right now, but I'm sure it will come back eventually. His love for shoes has also faded it seems, thank goodness, so he's not as opinionated on which pair he wears right now. I hope it stays that way for a while. I enjoy picking out his outfits without worrying about what he thinks. :) 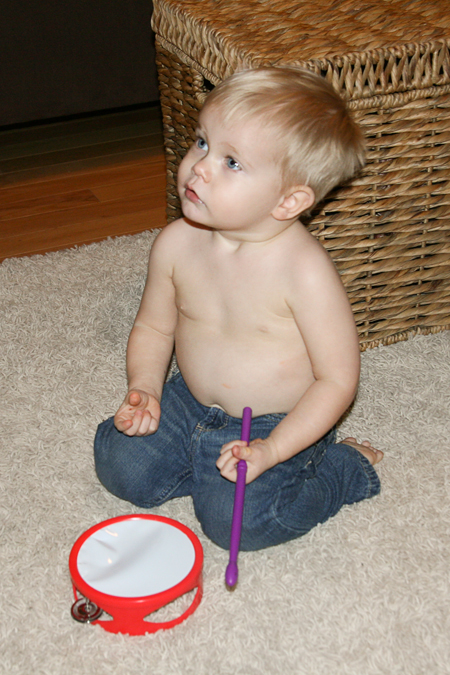 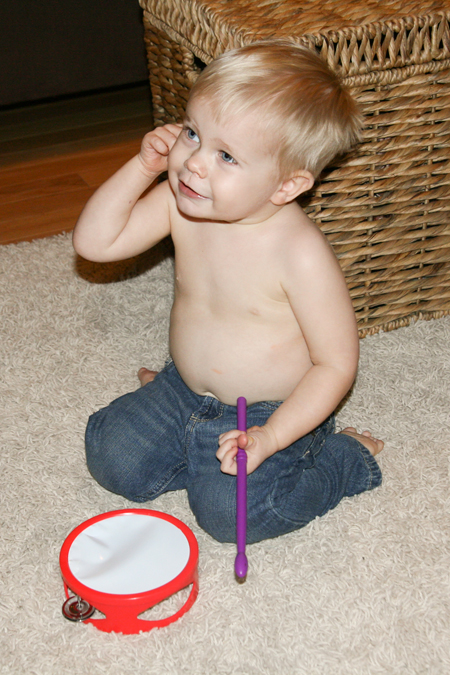 He's started getting more particular about his food, which can be slightly frustrating. Foods he used to gobble up he'll now turn his nose up at, including spaghetti, mashed potatoes, chicken, and mac n cheese. I have no idea why this started, but I hope it doesn't stick around. He won't eat ANY veggies and it's pretty much driving me insane. I just keep pumping him with fruit (he'll eat fruit all day long) and then I try to fill in the veggie gaps with veggie/fruit squeeze packs. I also try to hide veggies in food items such as pasta sauce to get some extra nutrition down him. 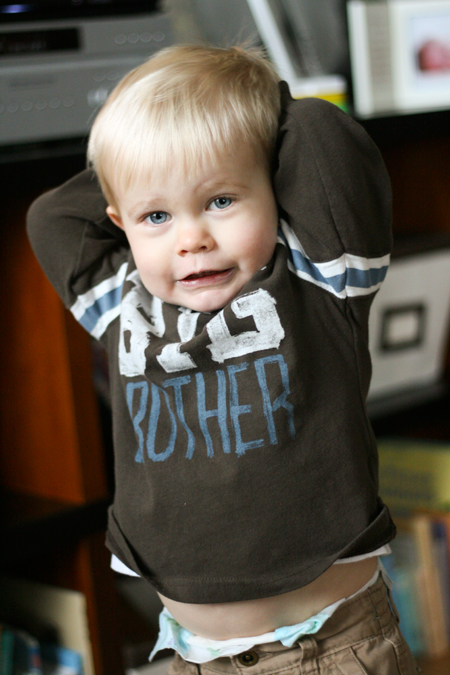 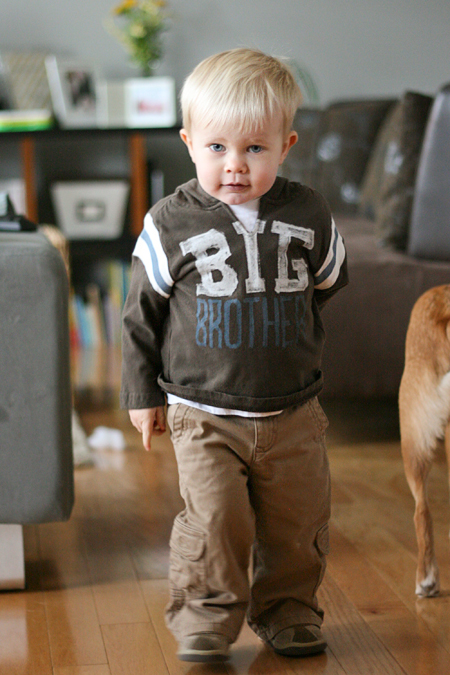 We've set up his new Ikea twin bed in what will be his new bedroom, and we'll be moving him over to sleep in there sometime in the next few months. We want to get him used to sleeping in there well before the new baby comes so we have as few adjustment problems as possible. Either way, I'm sure we're going to have some issues when the new baby arrives. He is very much used to being a single child with Daddy's and Mommy's undivided attention. :) 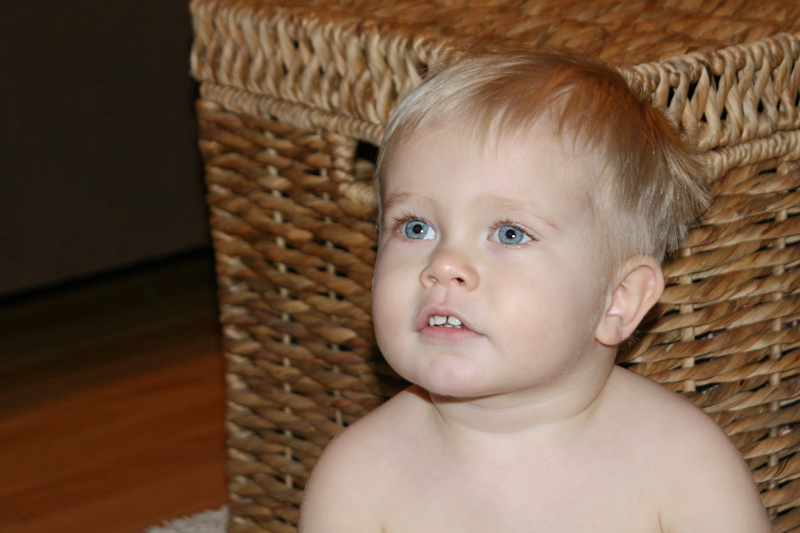 Oh, one other thing that has developed is that he is now INCREDIBLY independent and INCREDIBLY stubborn.  I mean, he was these things before, but they are markedly more obvious now.  He has to do everything himself.  And if we try to do something for him, he gets mad and falls apart.  To the point where if we hand him a cookie, but he wanted to pick the cookie from the plate himself, he will have a meltdown and refuse the cookie.  Yes, I'm serious.  Our child will refuse a cookie when he feels that his independence is being challenged.  Crazy, right? 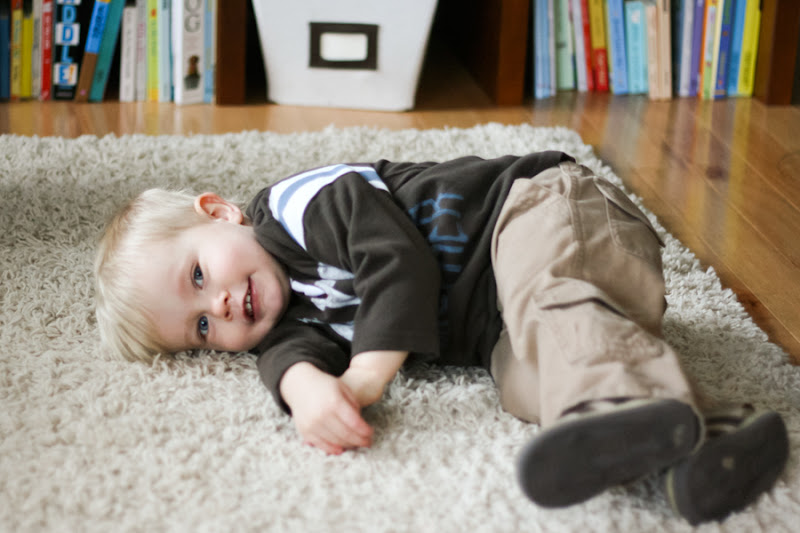 Whew, well, that was a lot of updating. I'll share more for his birthday in a month. :)