Happy Halloween everyone! We arrived home from our trip about 9:30pm last night. We had a great time, and Dave's team took fifth place (in the country) so that's not too shabby. :) Proud of those boys!!

Tonight was Krew's first time trick or treating. He went with Ellie (and me and Emily) in our neighborhood. He didn't seem to be bothered at all by the cold front we're dealing with or the drizzly rain, and he learned quick. After the second house, he was happily scampering up to doors on his own, giving them a timid and nearly-silent knock, then reaching for the candy bowl when someone finally opened the door (usually after Ellie provided a proper knock). He wasn't quite ready to say 'trick or treat,' but he did mumble out some shy 'thank you's with my prompting. I'm proud of my boy! 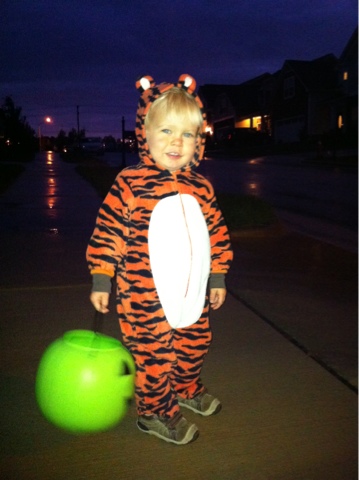 After about ten houses, Emily and I decided we'd gone far enough with the kiddos and headed back to our place where Dave, Sion, and Baby Cate were holding down the fort and passing out candy. I'm sure next year it will be more like twenty houses before we're done, and it will just get worse and worse every year after that. But that's ok. I like candy. :)

And just to show my Halloween spirit, I wore an appropriately-themed shirt to work today. Too bad I can only theoretically wear this shirt one day out of the year. I really like it. :) 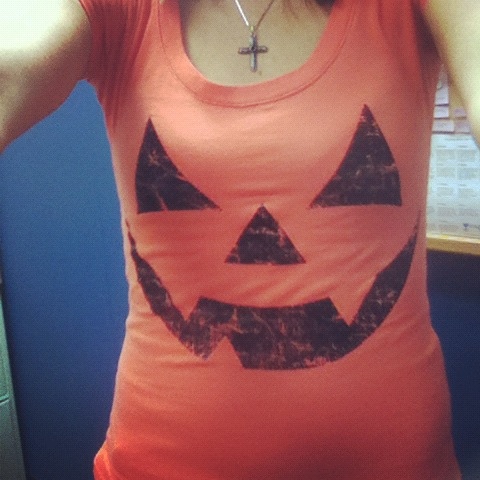 Alright, how was everyone else's Halloween?? Or if you don't celebrate it, what else did you do?