It's about time for an update on our little man!!

And a little man he really is. I just can't believe how much of a mini-person he's becoming...glimpses of babyhood are getting fewer and farther between. It's rather bittersweet. So neat to see him growing and changing, yet sad to know that the baby in him is disappearing and I'll never get it back. I guess that's why they say to try and enjoy each and every day. 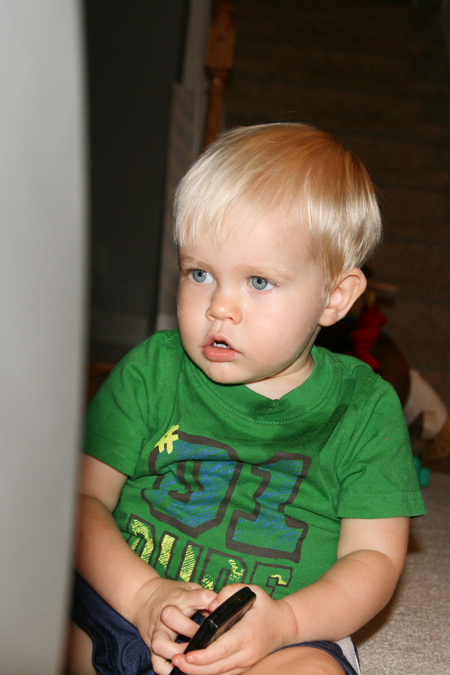 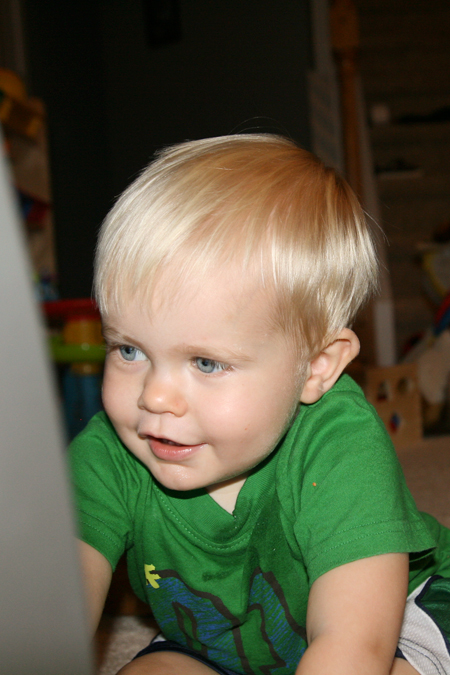 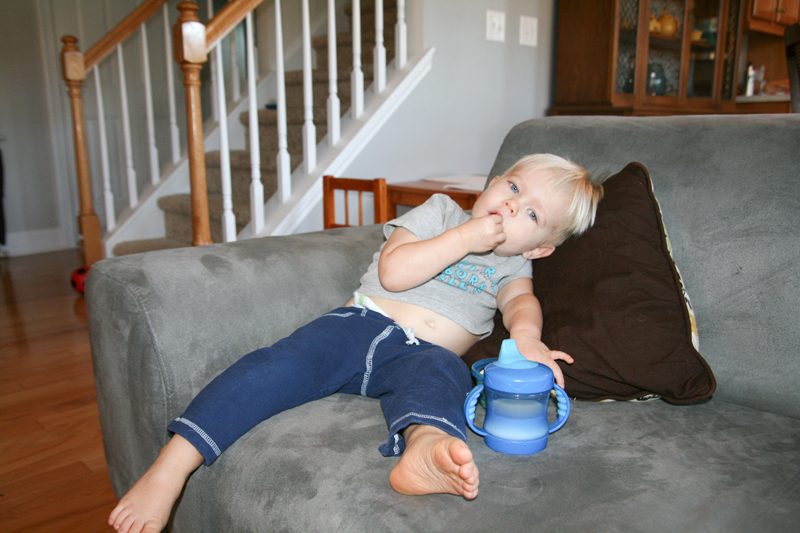 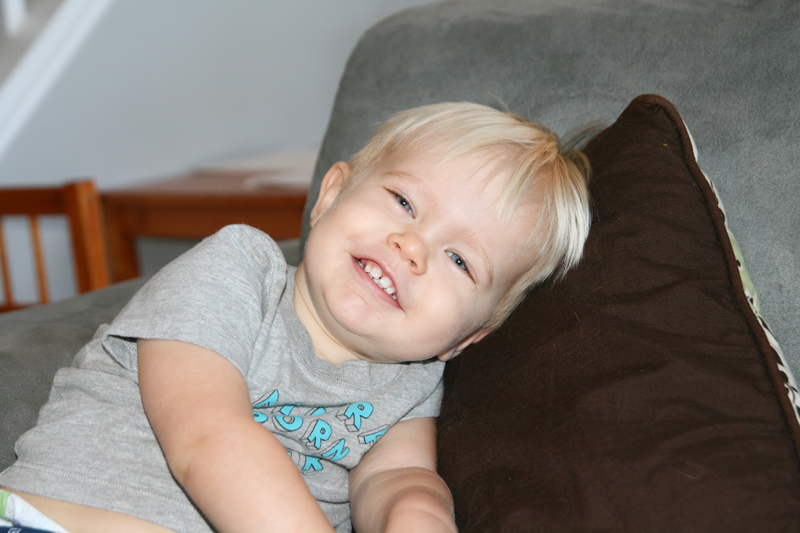 He's become quite the jabberbox these days, often trying to communicate with us through words instead of whining or crying (which is awesome!). Problem is we still don't know what he's saying half the time. Some words he says with great enunciation (apple, no, up, dada, mama), others are somewhat distinguishable (help, please, more, dog, ball, I love you), and others are honestly just way off (help='up', diaper='popo', and all the others I can't figure out for the life of me despite him repeating them over and over). 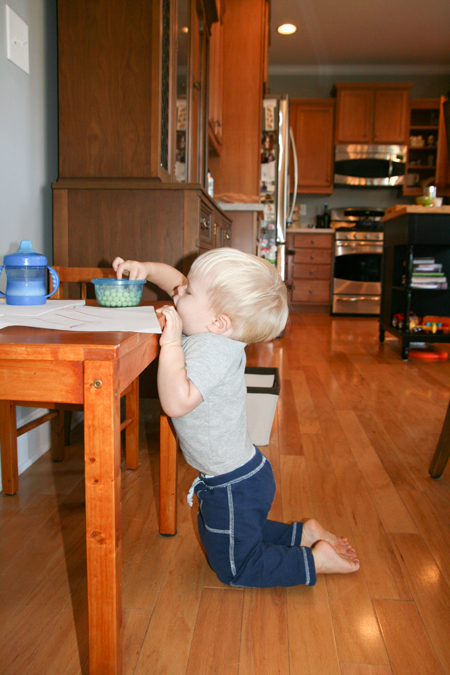 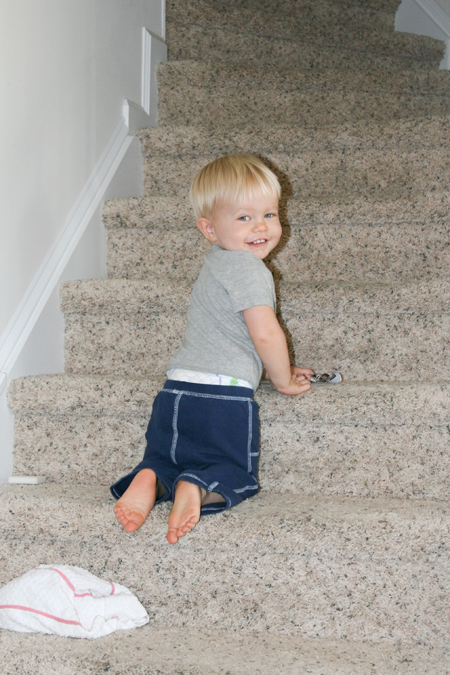 He still loves to sing and loves to dance. He'll even sing and bop to songs I make up on the fly ("I love Mommy, yes I do" or "let's get ready to go, yea yea yea" have been past features), and he's becoming great at memorizing songs he hears frequently and singing his favorite parts at all the right times.  We always make sure to have one of his CDs in the car so that we can stick in some of his music if he gets grumpy - 9 times out of 10, it cheers him up.  I guess he picked up his mommy's love of music!

And while he loves singing and dancing like his mom, he loves sports and movies like his dad.  He's developed quite the throwing arm and actually has pretty good aim for a toddler.  He loves all kinds of balls - soccer balls, tennis balls, little balls, giant balls, bouncy balls, baseballs - any kind of ball, he loves it.  He also loves to run, run, run all over the place.  If we take him outside and let him, he'll just run up and down the street for an hour.  Preferably while kicking or throwing a ball. 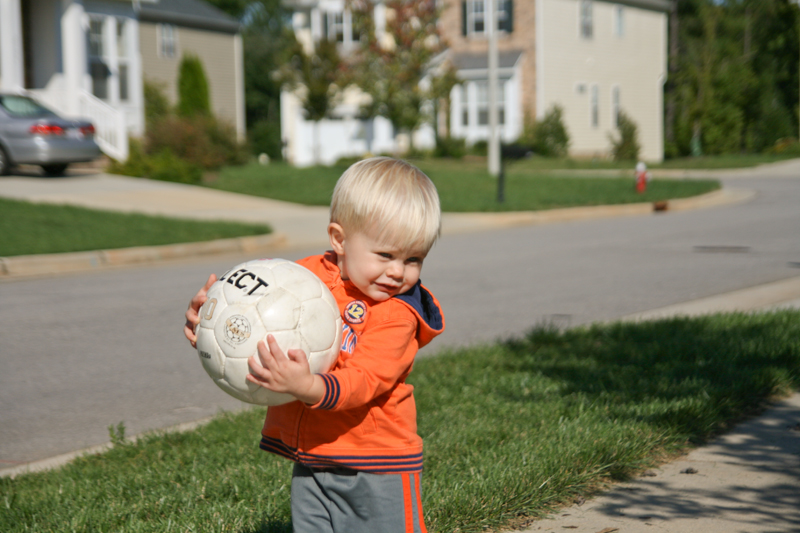 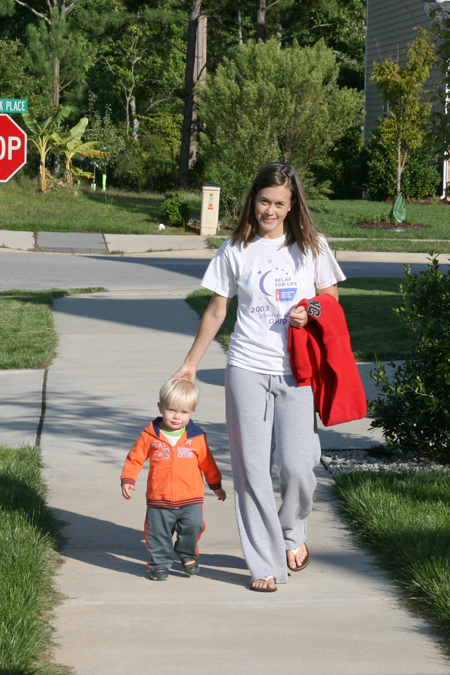 His favorite movies right now are Horton Hears a Who, Blues Clues, and Veggie Tales.  He loves dancing to the Veggie Tales intro song, and he's memorized the sound effects for the first 10 minutes of Horton Hears a Who and provides his own rendition while the movie is playing. He's also become pretty adept at playing on the iPad (he now turns it on, unlocks it, scrolls to find his favorite apps, and starts playing), and he's currently going through a shoe obsession. He frequently tries to wear Dave's shoes or my shoes, and sometimes while wearing one pair of his own, he'll bring us another pair and ask us to switch them. 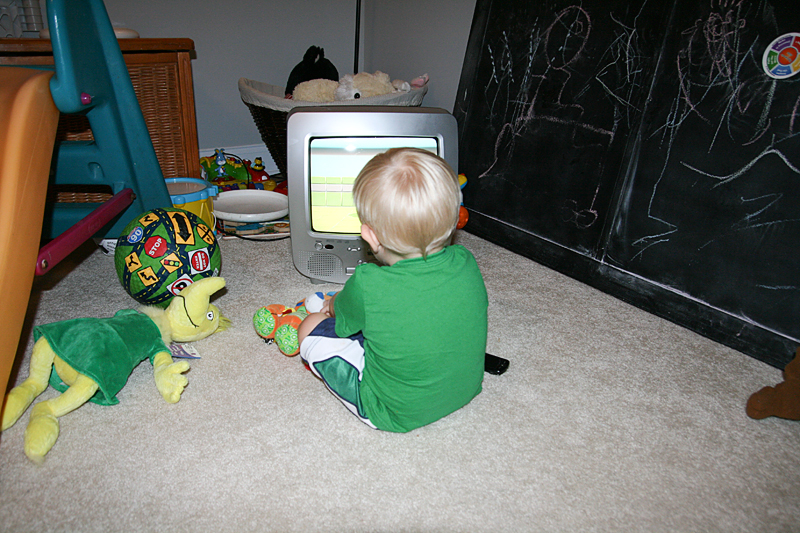 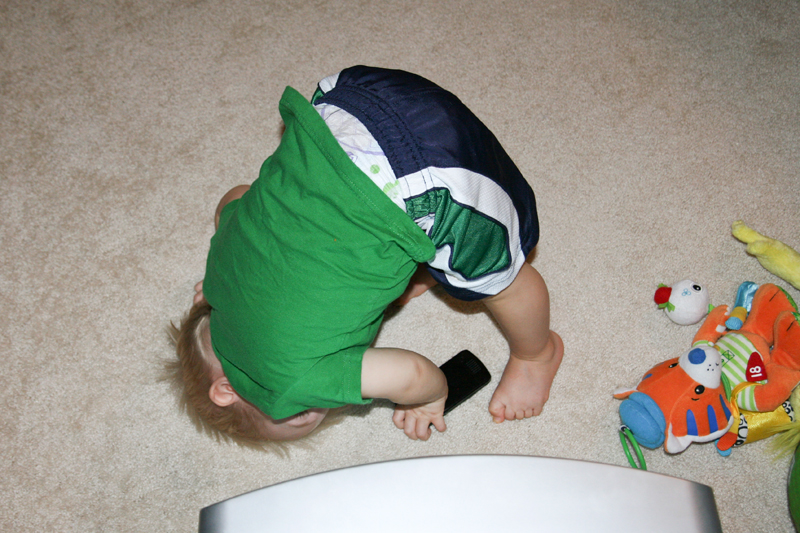 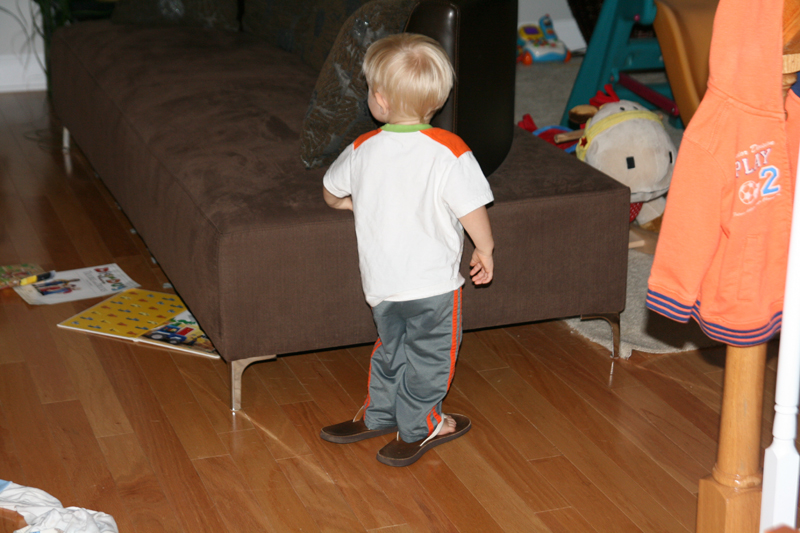 Speaking of veggies...I cannot get this boy to eat any vegetables.  He just doesn't like them.  At least not in their original form.  If I feed him pureed baby food veggies, he'll gobble them right up.  So even though he's close to 19 1/2 months, yes, I still feed my child jarred baby food a couple times a week.  If it gets vegetables in him, then it's worth it.  In the meantime, at most meals I continue to provide some type of vegetable in its original form, such as broccoli, green beans, or peas, in hopes that one day he'll decide they're not that bad.  It hasn't worked yet.  In fact, if I mix peas in with mashed potatoes or pasta, he'll take a bite, move the food around in his mouth, spit out the peas, and swallow the rest.  It's really quite impressive.

Krew loooooooooooooooooooooves his daddy right now.  I know he loves me too...but seriously, he's got a major crush on his daddy.  If Dave is in the room, Krew wants nothing to do with me.  Half of the time he won't even let me feed him a spoonful of food or bounce a ball with him and Dave together.  Nope.  It's gotta be Daddy and only Daddy.  When I take him places and then pull him out of the car upon arrival, he exclaims under his breath, "Dada!!" And I say, "No, honey, Daddy's not here."  And he responds with "Dada!!!!!"  And I again say, "No, honey, we'll see Daddy later, but he's not here right now."  "Dada!!!!"  And on and on it goes.  We got all the way inside Target today before he realized that I was in fact correct, we were in fact shopping at a store, and (lo-and-behold!) Daddy was not in the store.  He managed to hold in his "Dada"s until we got home, at which point they started all over again. 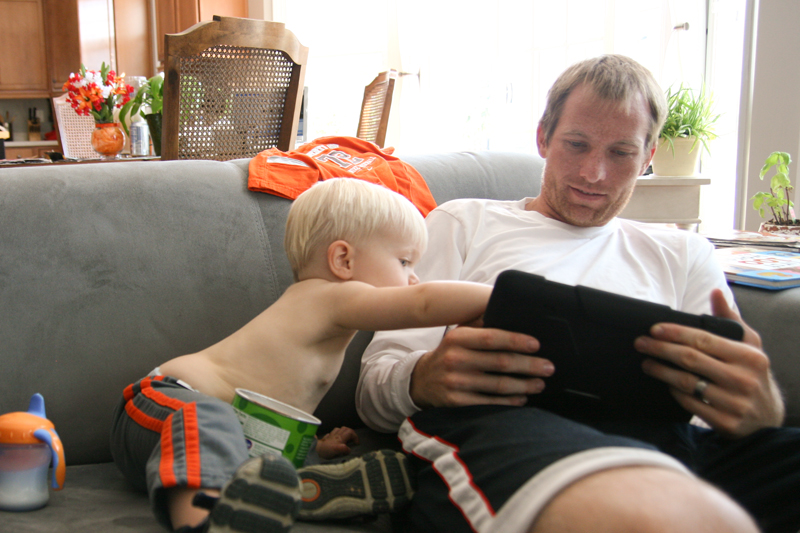 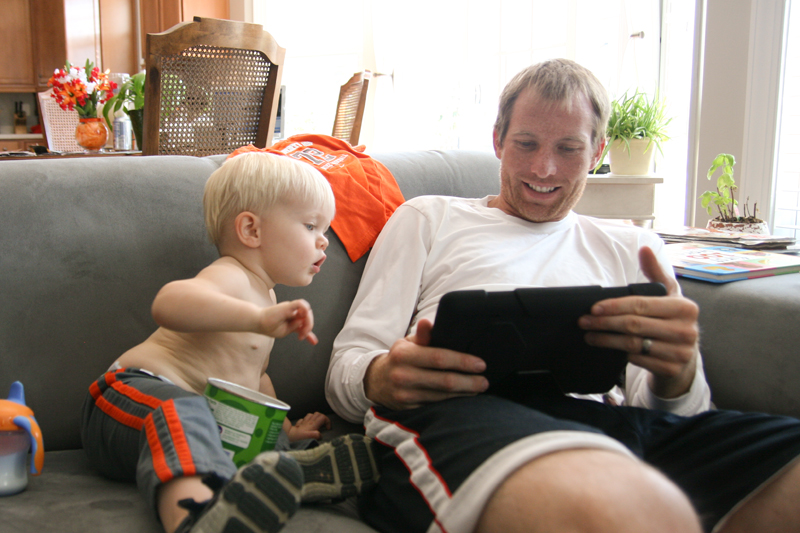 And along with his daddy, Krew also really loves his grandpas and uncles right now.  He must be going through a man phase.  Poor grandmas and aunts get the second-rate treatment along with Mommy here.  Oh well...our time will come, I'm sure.  And it is wonderful to see him loving his relatives so much, even if the men are getting preferential treatment.

Alright, I think that about sums it up for now.  Hopefully another update will be coming sooner than later. :) 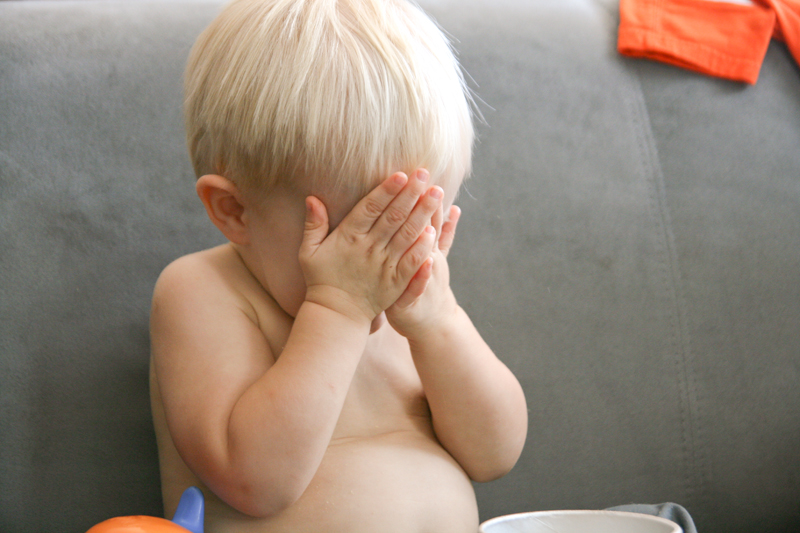 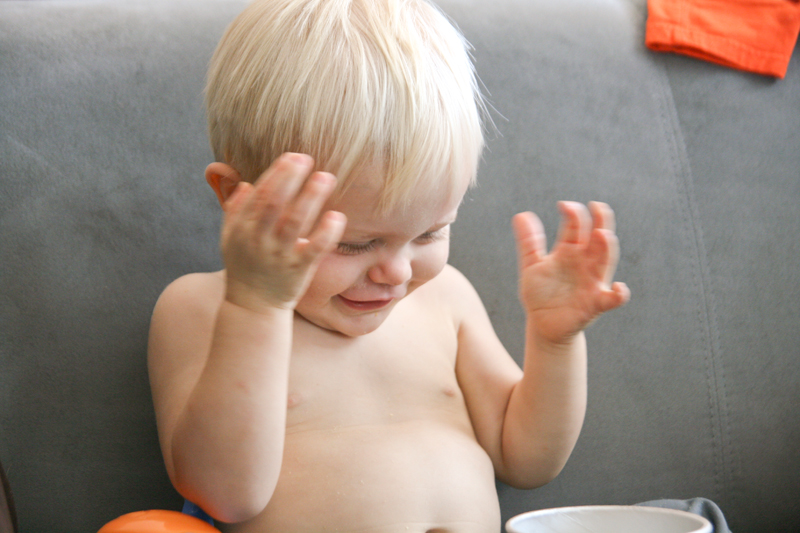 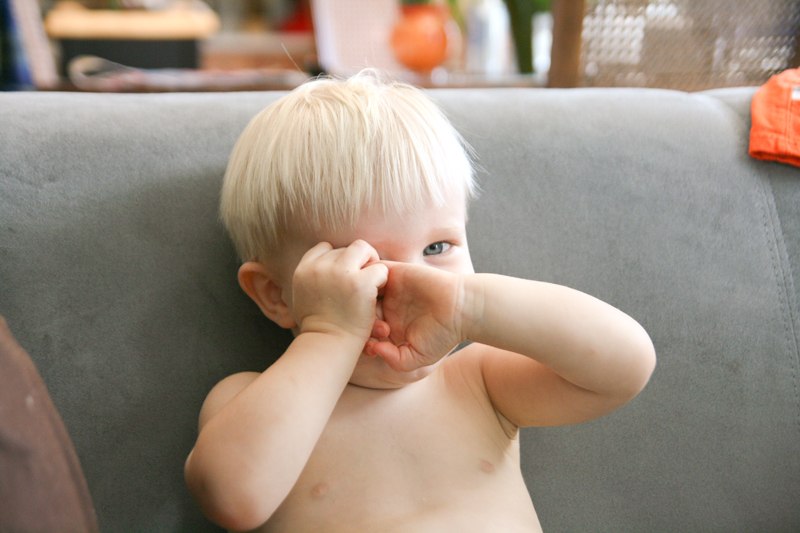 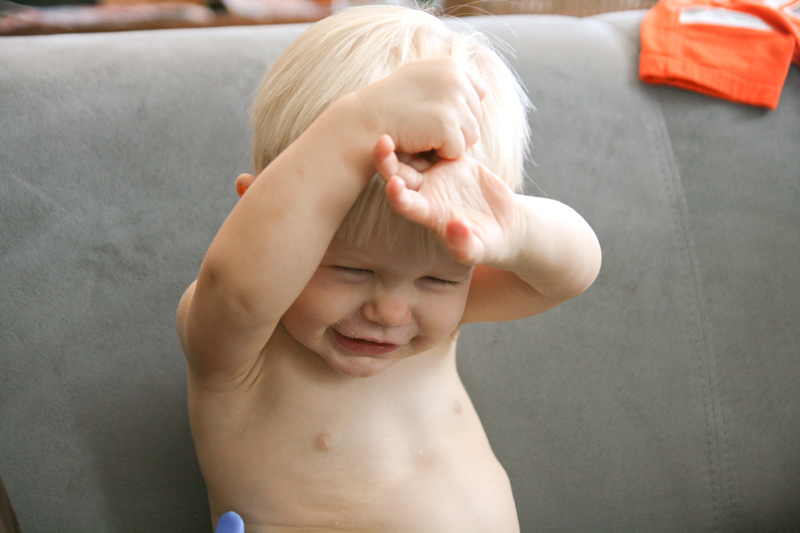 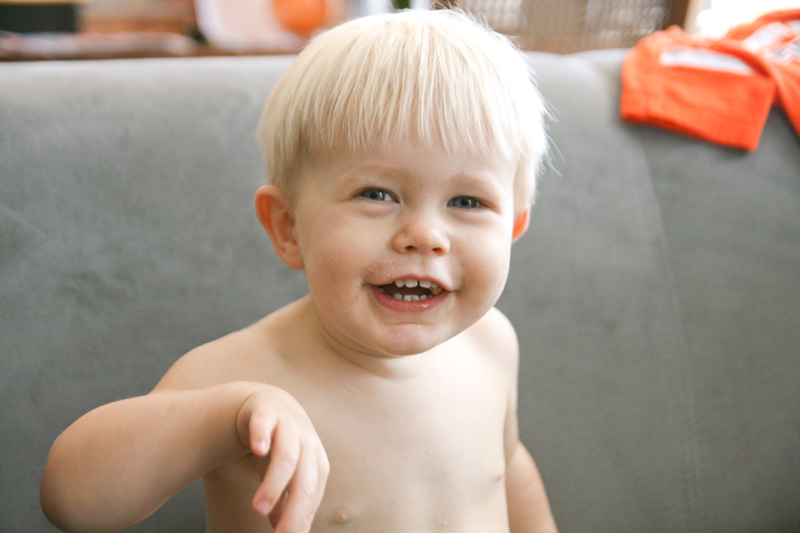