You hit your 18-month mile mark on January 28th, and I feel like I should have written an update between 15 months and now because you have changed in so, so many ways!

At one week short of 16 months, you finally decided to walk on your own. I can’t even express to you how excited I was. At first you were wobbly and slow, like any new walker is, but you’ve gained steadiness and speed incredibly quickly and are now very close to being able to run. You’ve even attempted to jump on a couple occasions, which always impresses your daddy and me. You’re still a climber, but have stopped performing quite as many daring climbing acts since learning to walk (thank goodness). You want to walk everywhere when I’d rather hold you, and you want to be carried when I’d rather you walk. Whenever I try to pick you up and you’d rather walk, you twist your hips away from me so that I can’t get you placed on my hip and you throw your arms straight up so that I can’t grip you well under the armpits. There’s been more than one occasion when I’ve walked into a store carrying you facing out on the front of me, my arms wrapped around you at your armpits, with you whining and crying with your arms up, feet kicking, belly hanging out in the cold. At those moments, though, more often than feeling frustrated, I feel so, so thankful that you CAN walk on your own and want to!! 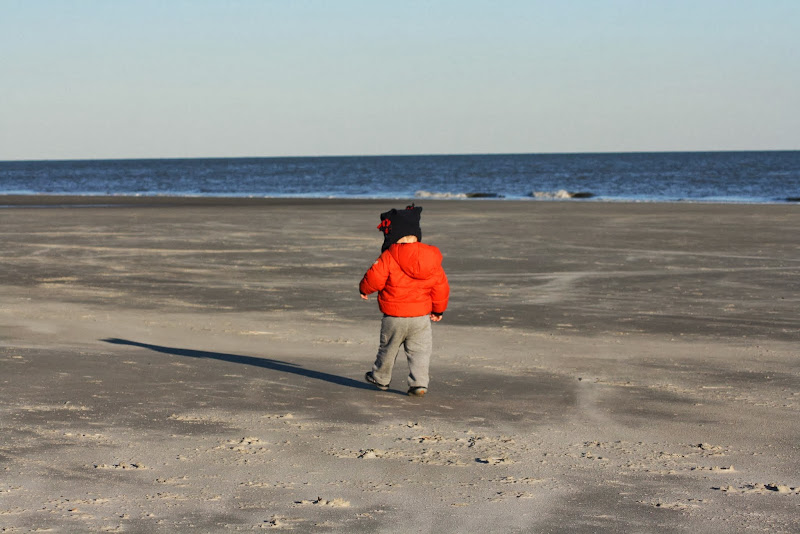 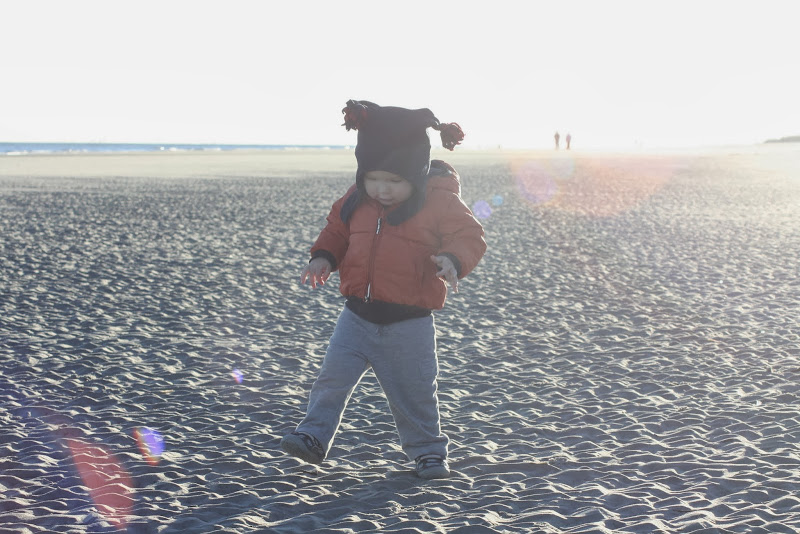 You’ve become a very picky eater and it’s often a challenge to make sure you’re getting a healthy variety of foods. You eat massive quantities of food - more than me at some meals! - but not a large variety. You would prefer to live on bread, tortillas, cheese, and yogurt. Sometimes you’ll eat meat. The only fruits you will eat are bananas, apples, and whole pears (where you get to bit off the pieces yourself). You don’t like any other fruit that I’ve found. You’ll even willingly put pieces of fruit in your mouth to taste test them, but you always spit them out. For vegetables, you’ll occasionally go through a one- or two-day phase where you will eat gobs and gobs of green beans or peas. I haven’t found another vegetable that you’ll eat otherwise (same thing happens as with fruit), and sometimes you’ll even refuse green beans and peas. So...we still feed you a lot of “fruit packs” (puree fruit/veggie pouches) as fillers. It’s the only way we can make sure you’re getting fruits and veggies in your body, so it’s worth it to me. 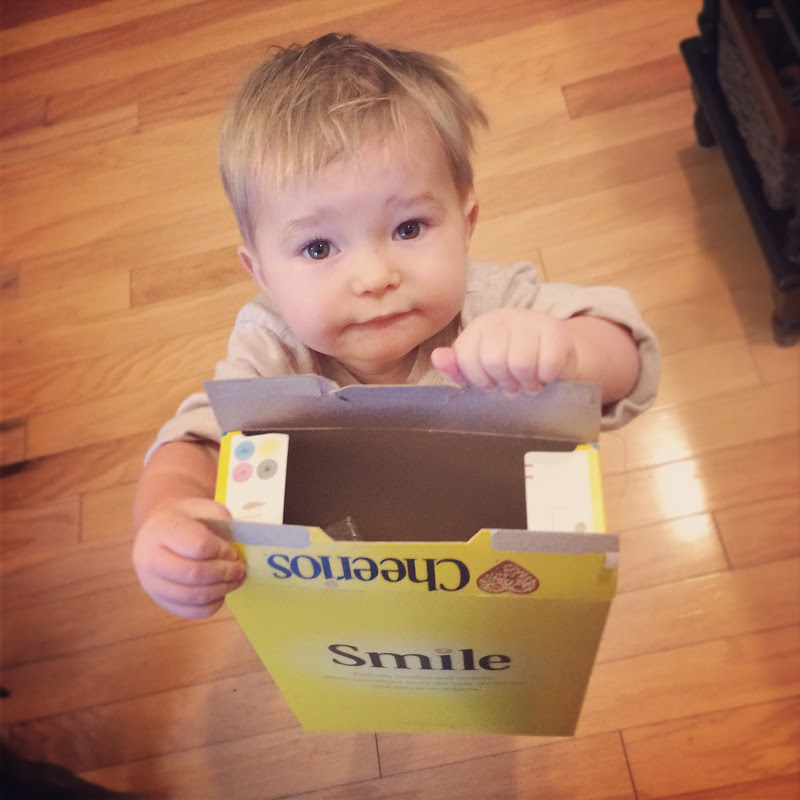 There are times when I wonder if you might end up being left-handed. You prefer to use your left hand for a lot of things, including eating with a spoon or fork. But then you usually reach for things with your right hand. So I can’t figure it out.

You talk SO MUCH and it absolutely blows me away. I would guess you say between 50 and 60 words. You will try to repeat almost any word we ask you to. Just in the past week you’ve started saying “Yes” incredibly clearly and I think it’s so cute - prior to that point you always said, “Uh huh!” Some of your other words include bubbles, Krew (Coo), daddy, mommy, ready, water (wawa), tortilla (pitty), book (bup), milk (guck), Fresh Beats (beats!), Elmo (emmo), no, up, light, doggie, Moo Moo, duck, fish (feesh), roar! (with hands out, claws bared), please (peez), uh oh, mess (when you spill something you proclaim, “A mess!”), help (hup), apple, banana (nana), tree, stuck (you frequently announce, “I shtuck!”), yay, cereal, and many others. We are able to communicate about pretty much everything, which is awesome, and you follow commands (when you actually decide to obey) such as “Go put your toothbrush in the sink!” In general, you speak and cry and scream much more loudly than I ever remember Krew doing, which can be slightly embarrassing when we’re in public and you decide to either jabber a lot or throw a fit. In both cases, I find your voicing carrying and echoing through the building and I start attempting nearly anything I can to get you to quiet down. I definitely think your favorite word is “no (neauh).” “No” combined with a shake of your head is your reply to almost everything we say unless we are offering you food or an electronic device. 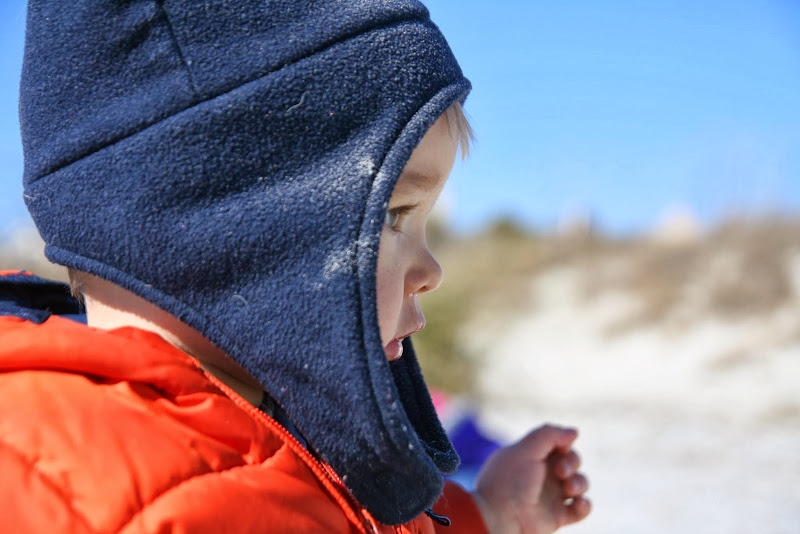 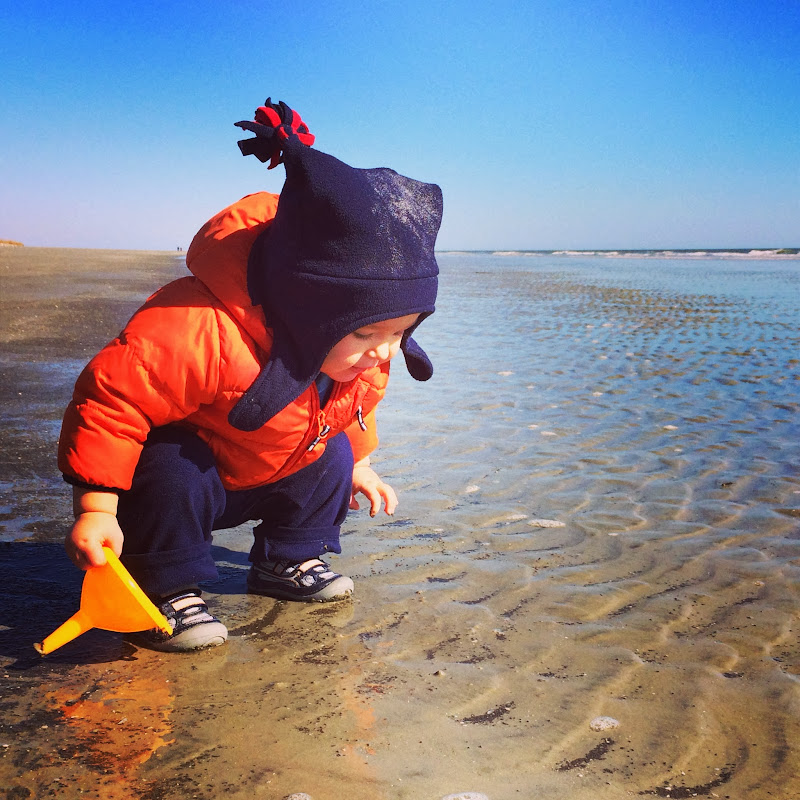 Speaking of electronic devices, despite our attempts to really limit your time with them, you are obsessed and it drives me slightly batty. You will sneak away when we’re not looking and find the iPad or the iPod touch and start them up and turn on your favorite cartoon. You are constantly bringing us the tv or Roku remotes in an attempt to get us to turn on the tv. We do our best to hide everything (out of sight, out of mind), but we still face daily meltdowns when we refuse to turn on the tv or iPad for you. 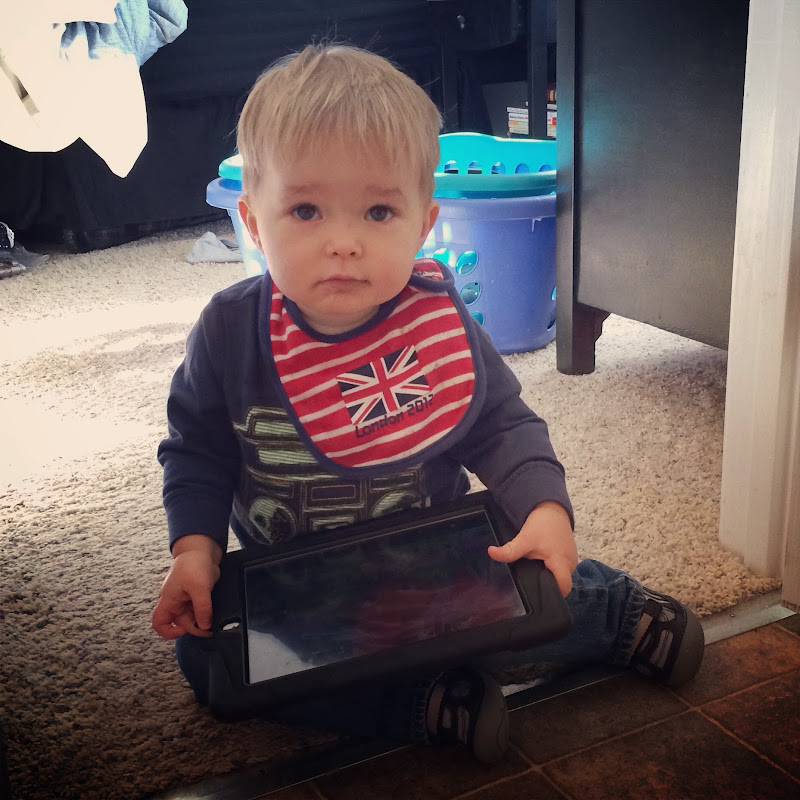 On the flip side, you also love books. I don’t ever remember your older brother loving them so much, and it’s fun how often you’ll bring me a book to read to you. I’ll even find you in your room by yourself, sitting in the middle of a pile of books, flipping through them on your own. Lately when I lay you in bed at night, your last request has been “Bup?”, because you want something to look at as you fall asleep.

You’ve recently become pretty adept at toddler puzzles, so we’ve been doing a lot of those lately. You also love the fishing game we have, where the fish go around and open and close their mouths and you try to catch them with a fishing pole. I’m pretty amazed that you can catch the fish, but you do, and will try over and over and over until you get one. You also prefer to play it with another person, and will bring an extra fishing pole to me, your daddy, or another adult and ask, “Pay??” (Play?) 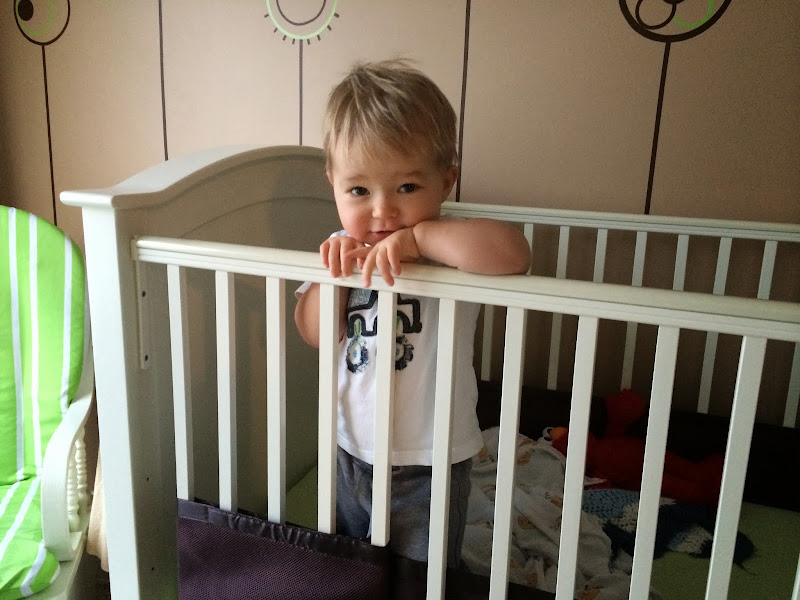 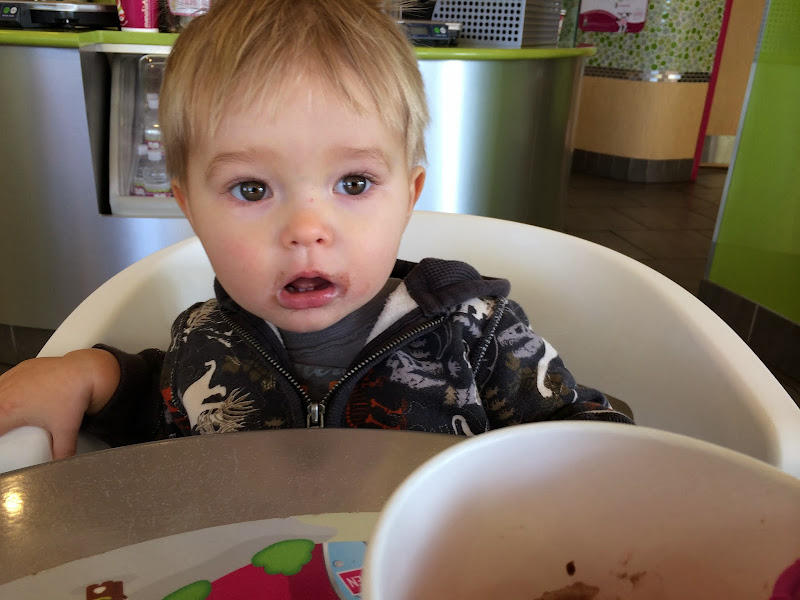 You have the same love for singing and dancing as your brother, and we now get to experience frequent dance shows that you and Krew put on for us together. It melts my heart. You and Krew have really been into watching Fresh Beat Band lately (we limit it to one or two shows on the Roku per day, but you’d rather it be MUCH more!), and you both dance your way through the whole show, trying to match the moves on the screen. You’re even now singing the songs from the show (“Uh oh oh no watcha say…”). You also love to sing “Down by the Bay” and “Jesus Loves Me,” which are both super cute. 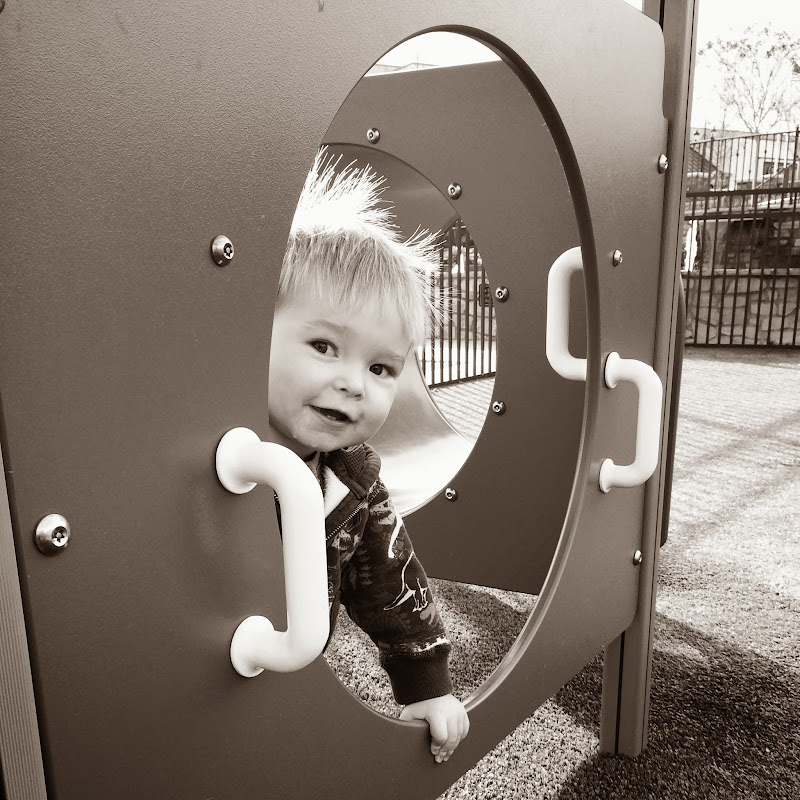 You love to follow Krew around and copy nearly everything he does. If you suddenly realize he’s not in sight, you’ll look at me and ask, “Coo?” It’s so precious. You also are very good at picking on him. You take things from him, smack him, and scream at him often, all usually with a big grin plastered across your face. He basically hates it and breaks down into whiny complaints every time. I kinda feel bad for the kid. :) 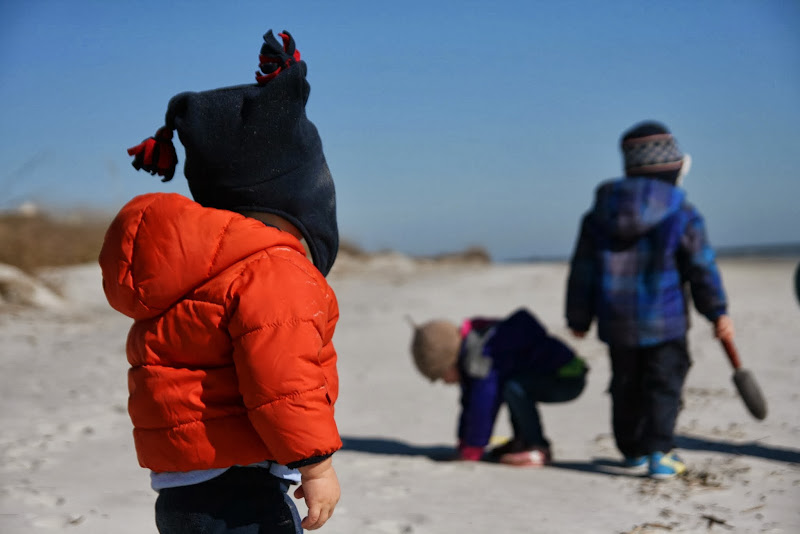 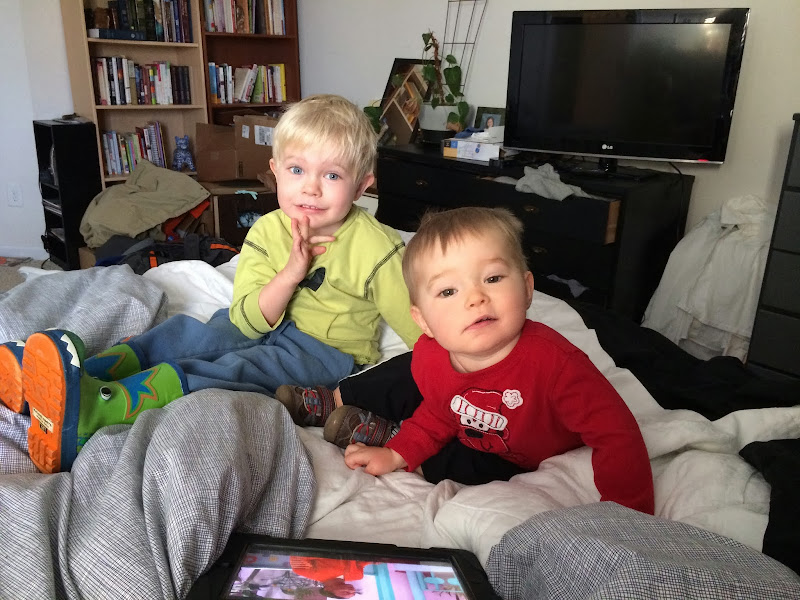 Your way of soothing yourself is to suck your thumbs. Yes, that’s right, thumbs. You switch between them, depending on which one is most easily available. I haven’t noticed any damage to your teeth yet, so that’s a relief, although I’ll keep my eyes open in case anything starts shifting like it did with Krew. As of now you have all four front top teeth, all four molars, and all four of your bottom front teeth (with two of them still growing in). 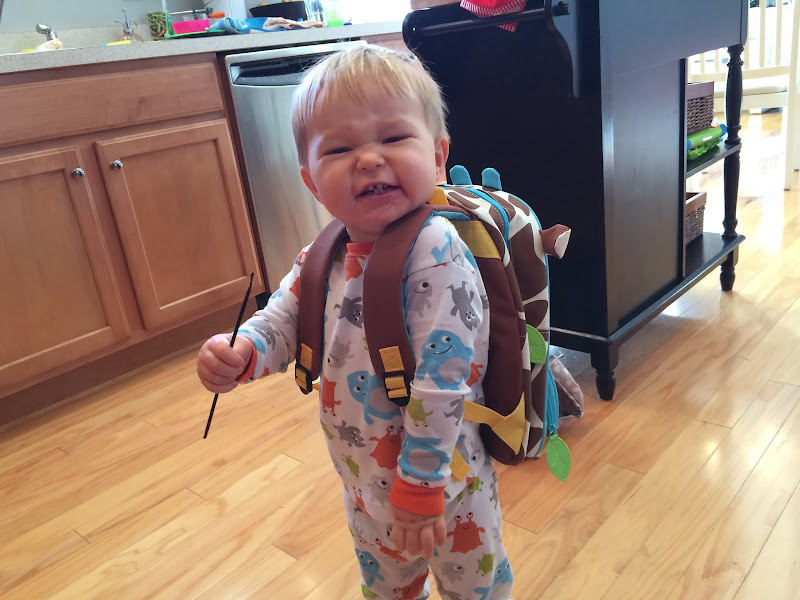 At your 18-month checkup you were 32.25 inches tall (47th percentile), 25 lbs 5.5 oz (42nd percentile), and your head was 19 inches around (63rd percentile). When I just looked back to Krew’s 18-month checkup stats, he was almost EXACTLY the same size (except weighing a little less - which is funny because you look skinnier than he did)! It will be really interesting to see if you slow down in growth as much as he did and end up being a shorty as well. For his sake, it may not be such a bad thing if that’s the case, since you already pick on him more than he picks on you. In contrast to Krew, (who was wearing size 5 or 6 shoes at this point), you are still wearing size 4s. You are also still in size 3 diapers. You wear some 12-month shirts, but mostly 18-month shirts and pants. Your hair became incredibly blonde in the summer, but now that we’re not outside a lot and I’ve cut it several times, it looks more dark blonde, almost brown. I’ll be curious to see what happens this coming summer, if it lightens back up. Your eyes are a light brown, sometimes appearing hazel-ish. (To see Krew’s 18/19 month update, read here: http://www.just1step.com/2011/10/1819-month-update.html.) 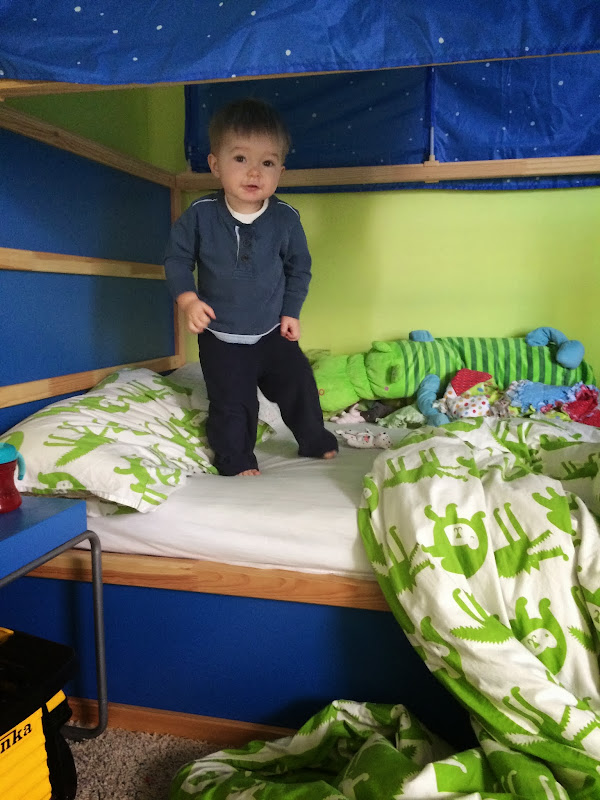 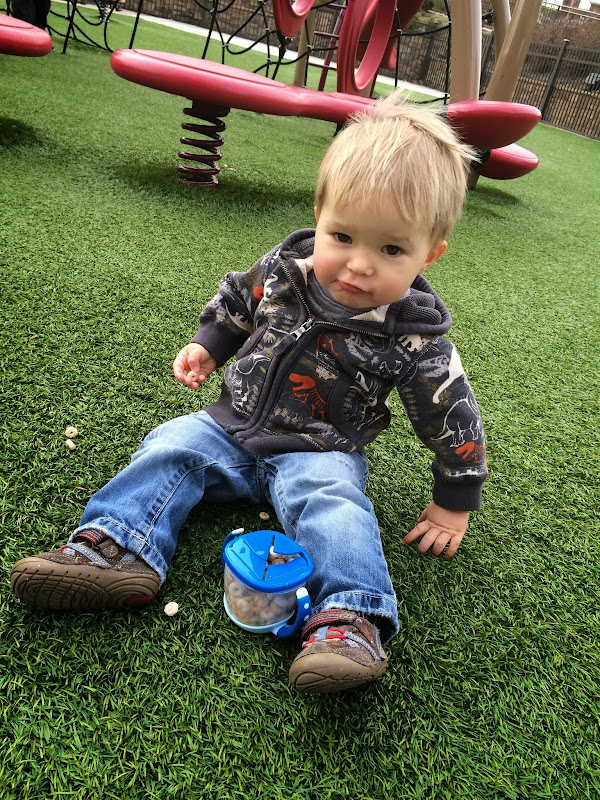 I feel like I could write about you all day (I always feel like that when I’m writing about you boys), but alas I must get back to my daily life. So we will end this update here. :)