Last Wednesday was quite the adventure.

I had an appointment at noon.  Despite forecasts of snow coming, there wasn't a flake in the sky, so I dropped my kids off at a friend's house and went on to my appointment.

The flakes started falling at about 12:20pm and I watched out the window as the snow piled up. By the time I went to my car at 1pm, my car was covered in snow and I couldn't see the ground.

The following is the story of our Snoke Snow Adventure:

First I called Dave and asked him to pick up the boys from our friends' house on his way home from work, since he was going by there and it was out of my way. (He was headed home from work due to the snow.) 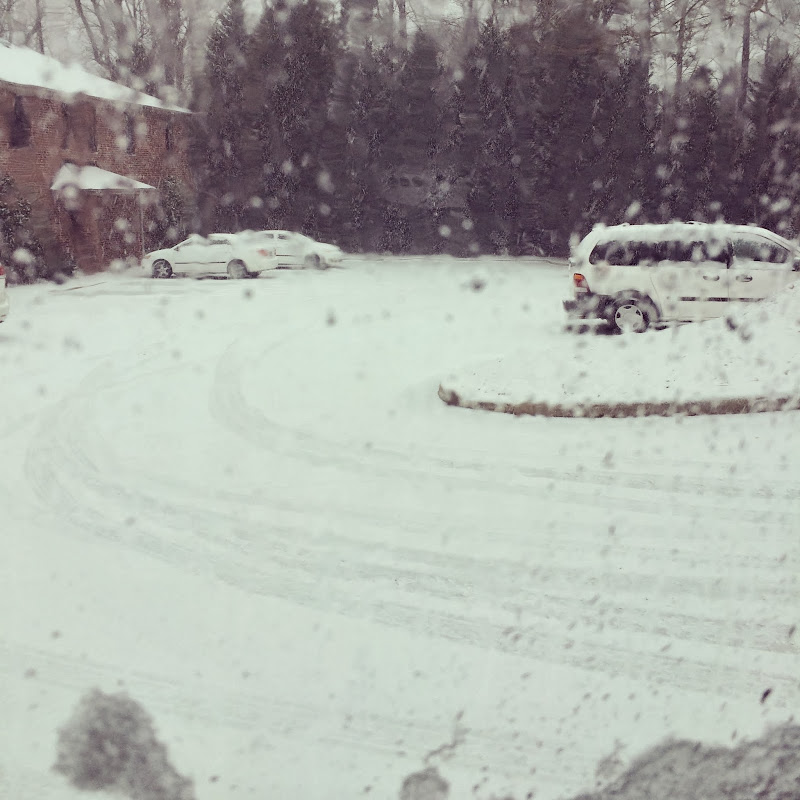 I then had a ten minute wait to get out of the parking lot due to already forming traffic jams. 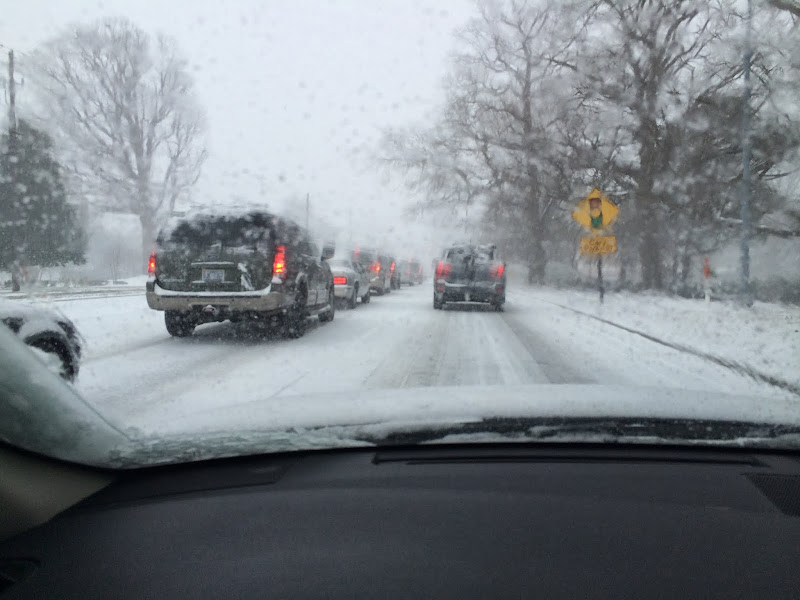 And then approximately a 35 minute wait to go one mile down the street.
For a total of an hour to go the four miles home. On very, VERY slick roads with cars stopped left and right for hitting the curb or each other.

Once I got home, Dave and the kids were still in our rear-wheel SUV five miles away, going nowhere due to car wrecks everywhere and ice-covered streets. 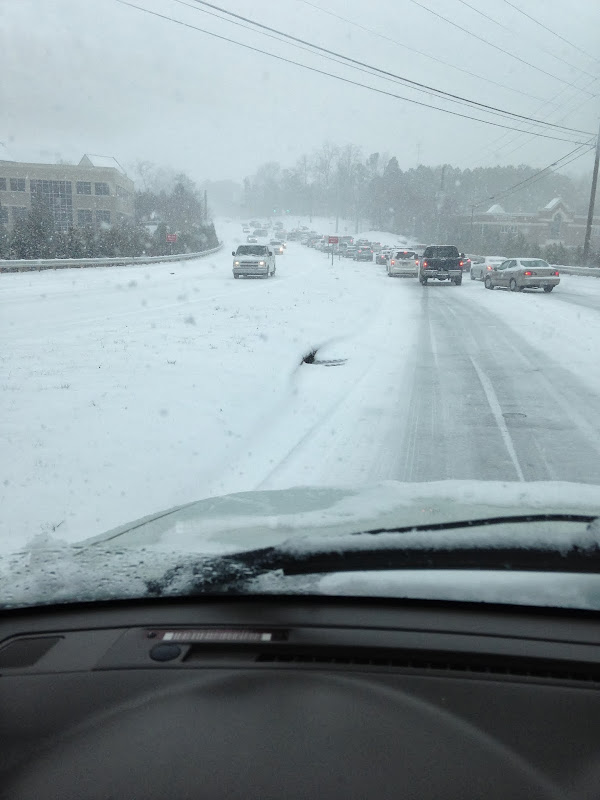 This was Dave's view on the way home.
About 30 minutes later, after moving maybe a quarter mile and sliding several times, the last of which was into the lane of oncoming traffic, Dave decided to hang it up.  He parked the SUV, bundled the kids up, and started trekking through the snow storm with one in each arm, headed toward our friends' house that was about three miles away.

Fortunately, our friend Sion ran out to meet Dave with a double stroller and helped him get the kids to their house. 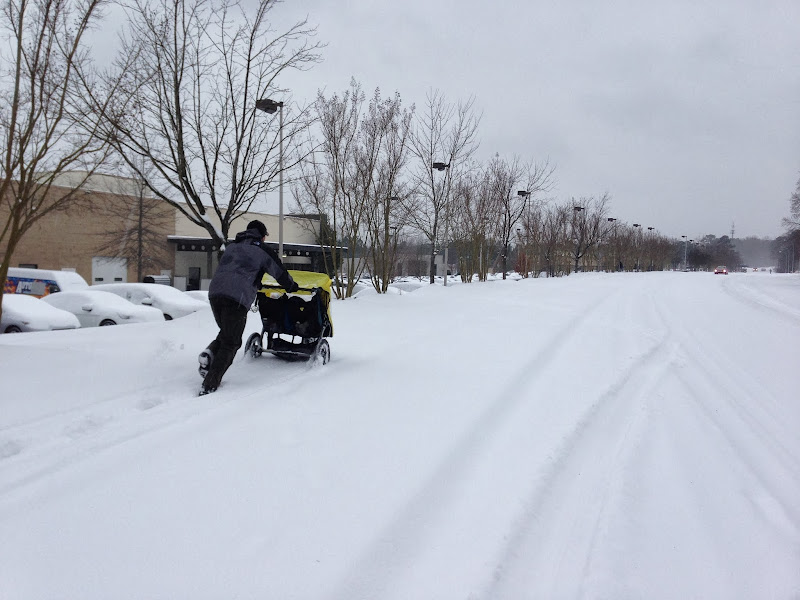 Meanwhile, I decided that I wasn't about to sit at home by myself all night in a snowstorm while my family was all at our friends' house having a sleepover.  So I packed a backback, covered myself in snow gear, asked our neighbors to feed our dogs, and headed out. 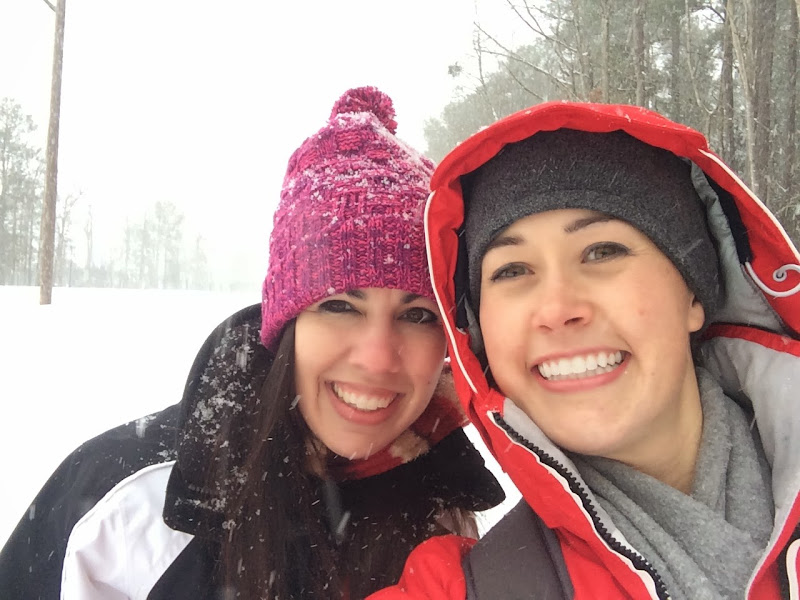 My sweet neighbor friend Sarah joined me for half of the hike.  We went through the nearby park and it was actually really pretty with all the snow. 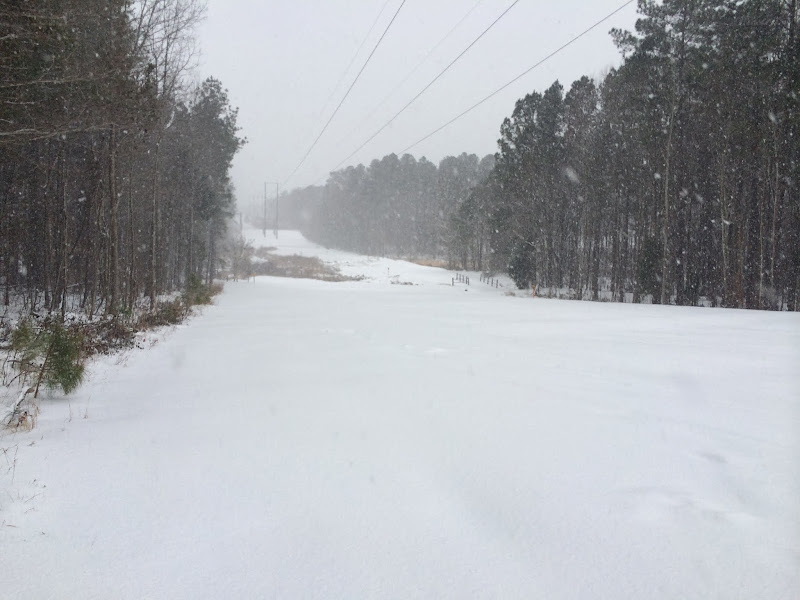 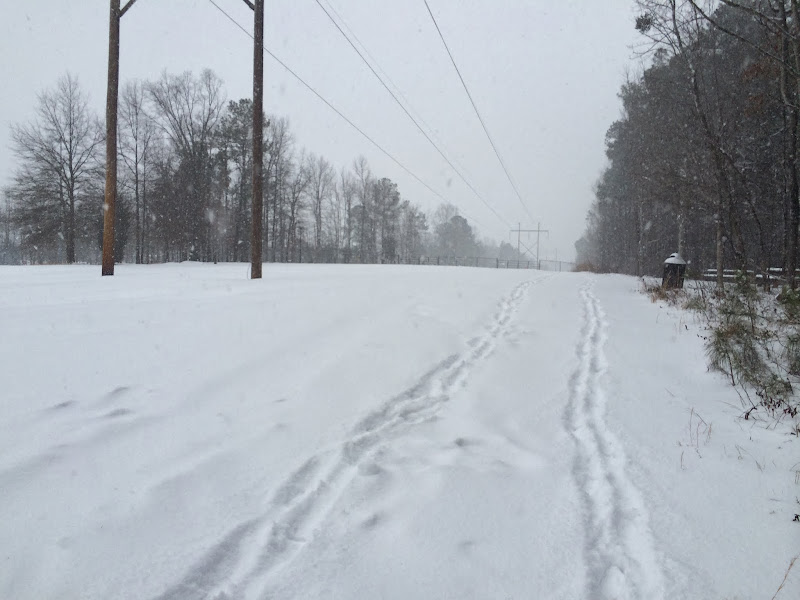 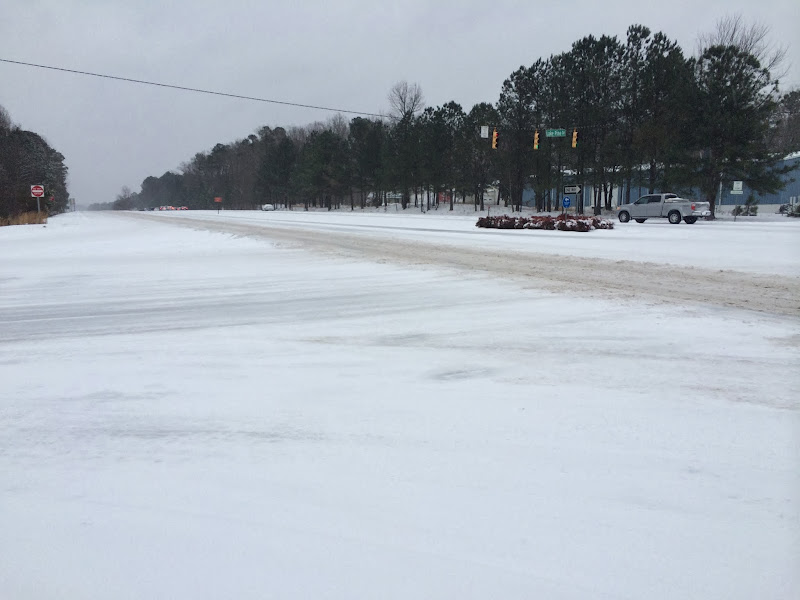 This was the state of the four-lane crazy-busy road about a mile from our house. It seems that most people had given up on driving by this point. 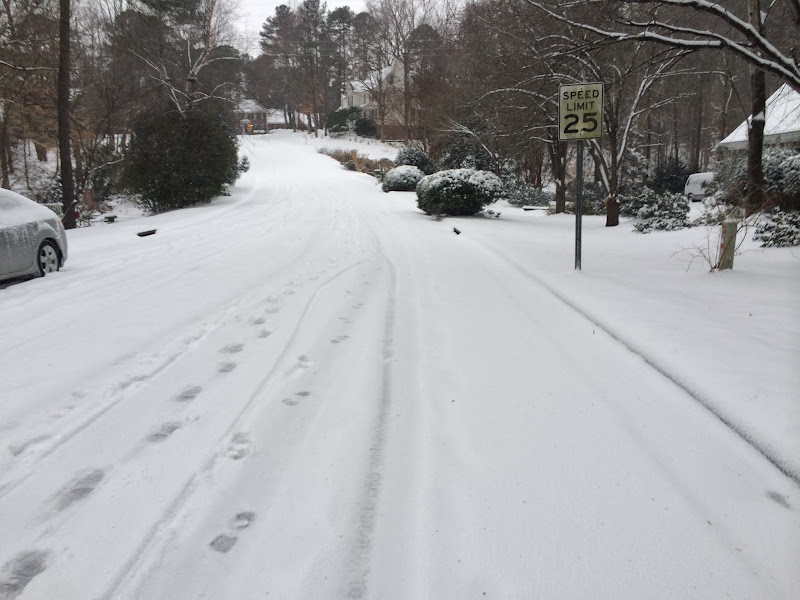 Without any difficulties, I made it to our friends' house in about 30 minutes.
Fortunately for all of us, our friends had enough food to make us dinner, the power didn't go out at all, and our kids had a fun time having a sleepover together. 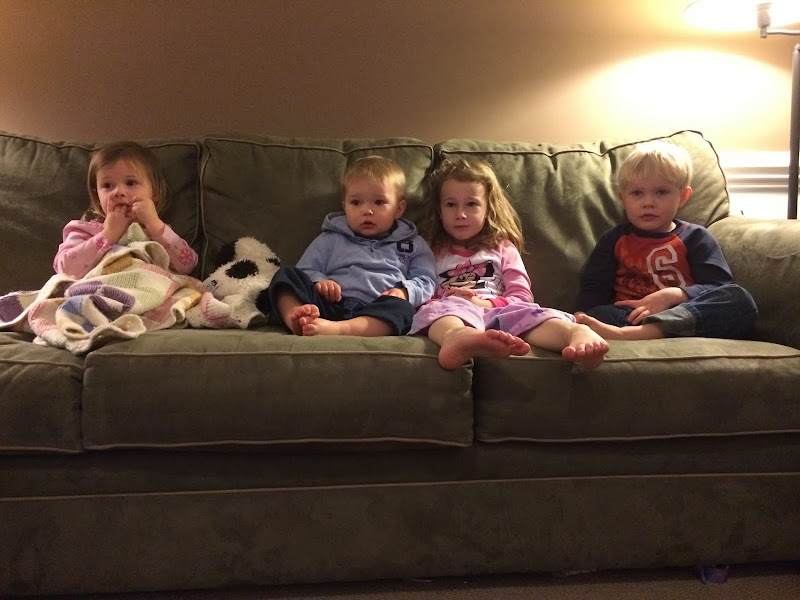 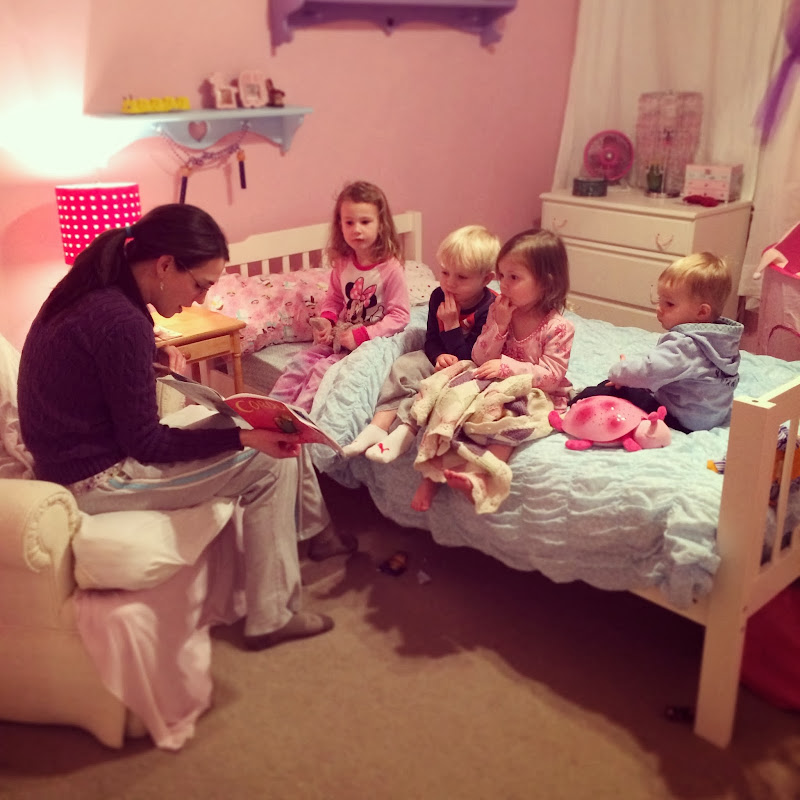 After a good night's sleep, the next morning we ate breakfast and headed off to walk back home. 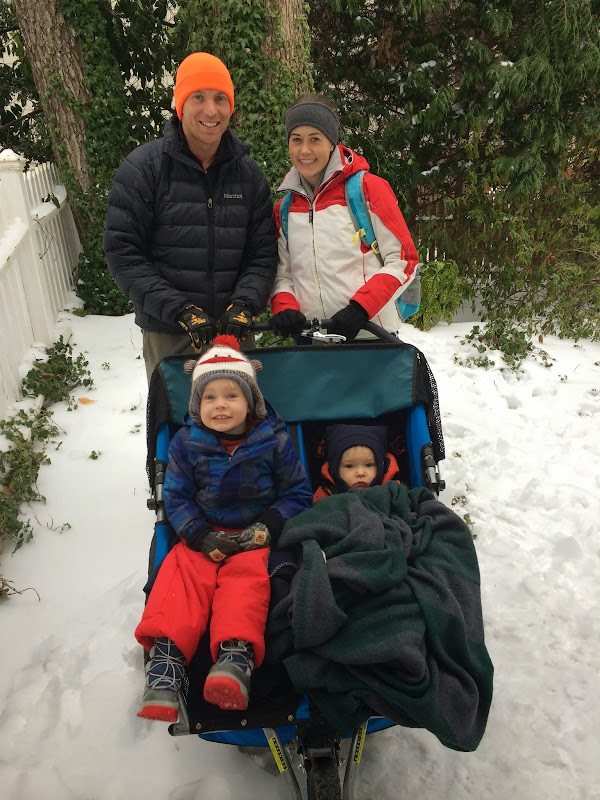 Which unfortunately didn't go very well, because the snow had been covered by a sheet of ice and made it nearly impossible to push the stroller through the snow.  It was no longer light and fluffy - now it was like trying to jam the stroller wheels through a wall with every step. We made it through the neighborhood by going down the middle of the street, but we were really struggling once we made it out to the main road because casually walking down the center of the lane was no longer an option. The roads were still not in great shape, but there were also enough people driving on them to make walking down the middle of them less than safe as well.

Fortunately some kind strangers drove by and took heart and strongly encouraged us to accept a ride home from them.  So we ended our adventure by hitch hiking.  Because that's what you do when you get stranded by a snow storm. 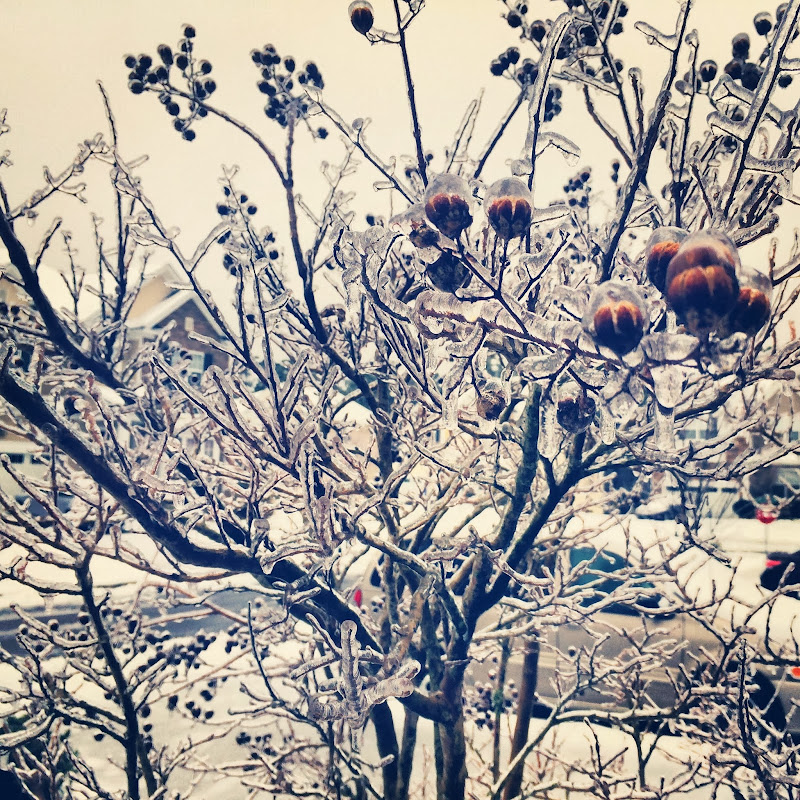 Email ThisBlogThis!Share to TwitterShare to FacebookShare to Pinterest
Labels: {Momtography / Lifetography}, {My Life}