Today our little boy is 21 months old!! Halfway between 1 1/2 and 2...crazy.  And he's really started acting sooooooo much older in the last two months.

His vocabulary has exploded...but unfortunately his pronunciation skills have not, haha.  He talks a ton, but usually only Dave or I know what he's saying.  He's even started streaming two or three words together.  His favorite phrase right now is "I got it!!!" whenever he does something he's proud of.  I think it's super cute.  He also likes to say "Daddy go???" ("Where did Daddy go?") and is always saying "Mo Mo?" because he wants to know where Maggie is (she is apparently his favorite dog right now, and we call her Moo Moo, but the closest he can get is Mo Mo).  His favorite single word undoubtedly is "NO."  Said loudly and defiantly with attitude.  To any question you ask him or anything you request of him.  It's gotten him in trouble more than once. 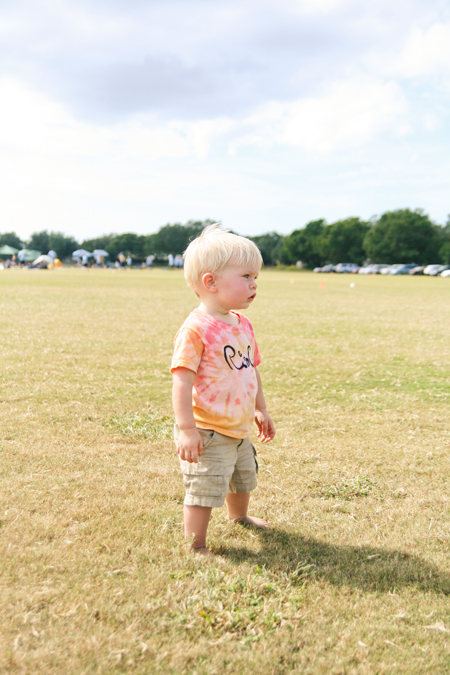 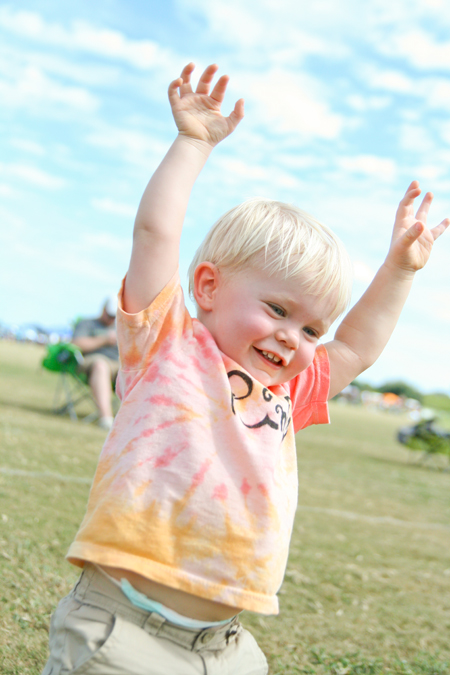 He now runs all over the place, and his run is getting smoother and smoother.  When he first started running, he'd do this funny twist thing with his hips that would make his legs fly all weird and cause him to run slower than he walks.  Fortunately he is doing that less and less. :)  He's also become a super climber.  He can climb ladders, playground equipment, up onto our very high bed, and up into the car and into his carseat. 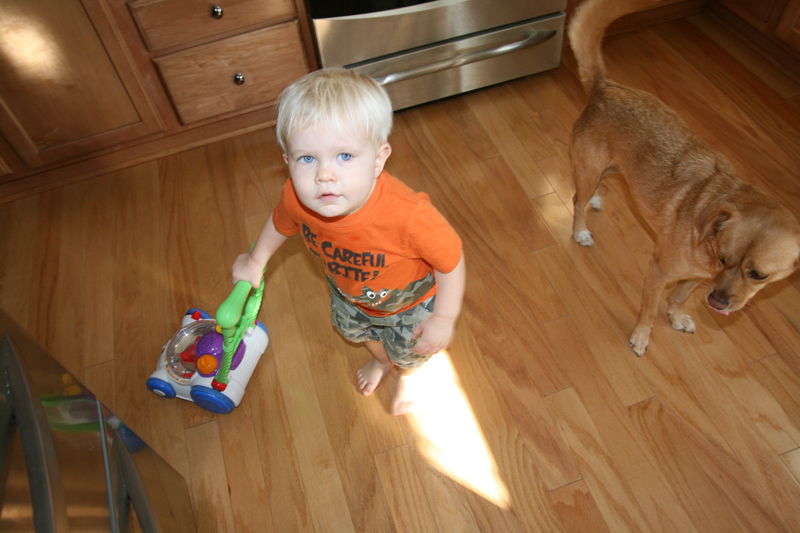 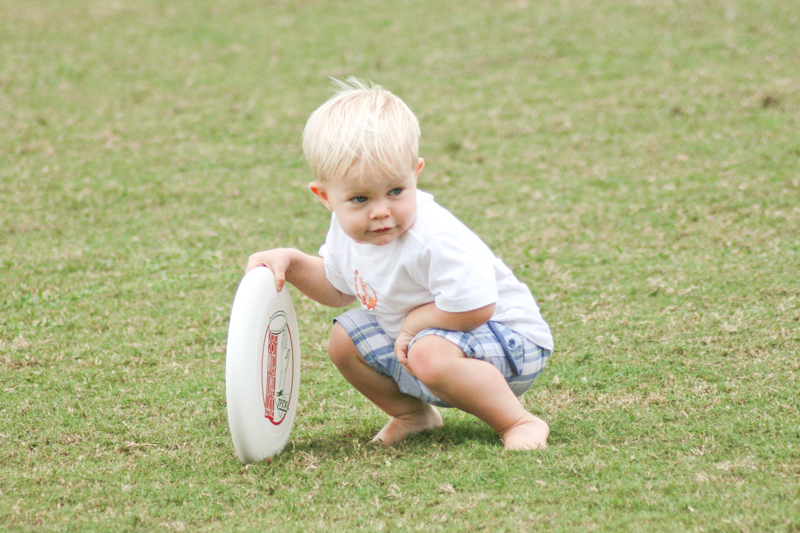 He's definitely starting to hit the terrible twos and show a lot more attitude these days (typically using that "NO" I mentioned above).  We had two mornings last week where he was furious with me and wouldn't play with me before work because I'd reprimanded him for something. It made me a bit sad, but I guess there's no way around it if I want him to learn to obey.  I suppose that's the job of a mama...but it sure is hard sometimes. 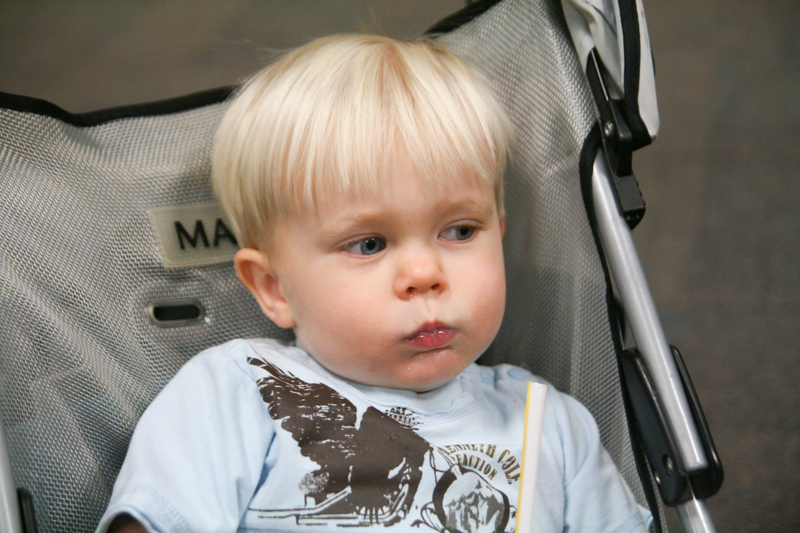 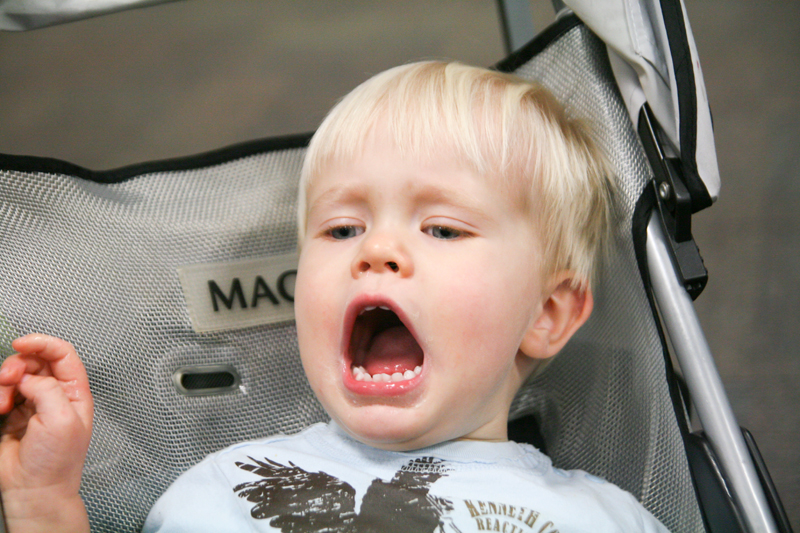 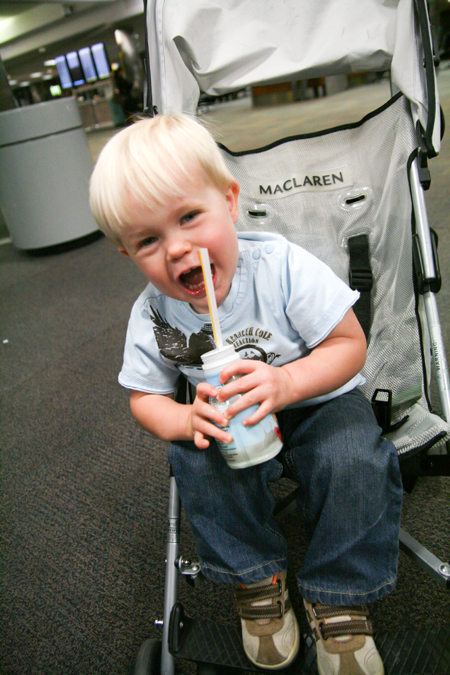 In terms of clothes, he's wearing mostly 18-month pants (some 12-month in the bigger brands), 18-month shirts, 18-month pajamas, size 6 shoes, and size 4 diapers.  I tried to make it through our full stash of size 3 diapers before moving him into 4s, but I just couldn't do it.  I started worrying the diapers were going to cut into the poor kid's skin or block circulation.

He still loves his music so much, and it makes me sooooooooooo happy.  He just sings and sings...and surprisingly sometimes even sings on pitch.  Both Dave's dad and my brother noticed it in the last couple weeks and said something about it without me mentioning it...so I know it's not just my hopes and dreams putting notes in my head. :)  And today he did something really awesome related to music (in my opinion).  We were listening to Christmas music when a song came on that was just a guitar playing.  I looked over, and all of a sudden Krew put his hand up and started to pretend to strum a guitar on his belly.  I was like holy camoly he knows it's a guitar!!!  I mean, maybe he totally didn't know, but it sure seemed like it, and I told him, "Good job buddy!! Yeah, it's a guitar!!!" and he just kept strumming and strumming.  I was absolutely amazed.  And super excited.  Dave just smiled and probably inwardly rolled his eyes at me.

Krew still loves to dance, still loves sports with his daddy.  Still loooooooooooooooooves to be outside, even in the cold.  Favorite movies are still Horton Hears a Who, Blues Clues, and Veggie Tales. Still amazingly adept at playing on the iPad. And both of our iPhones. Still loves shoes. And usually has an opinion on which shoes he wears when. 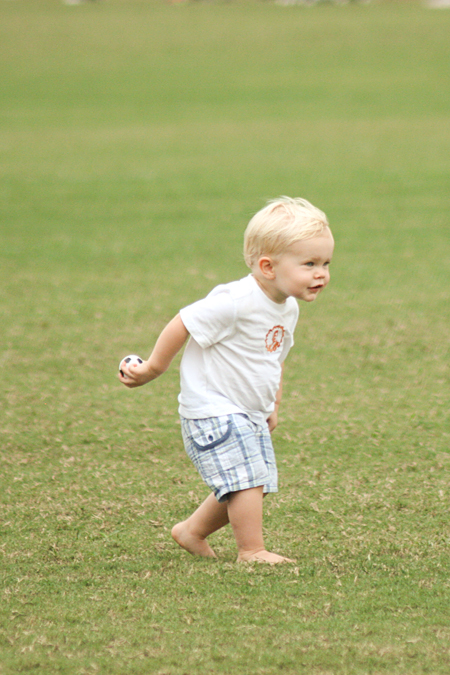 I finally got him to eat some veggies this week by breaking up green bell pepper and giving him ranch to dip it in. He also ate some little steamed broccoli florets when I put little dabs of butter on them. I was stoked. (Other than that, he's been getting all his veggies through squeeze packs of pureed fruits and veggies.) I also discovered a trick about other foods he won't eat. I'd heard that a child could try a food many times before truly determining that he didn't like it. I decided that Krew should like pears, so I offered them for every meal for two or three days. He refused to eat them for the first couple meals, but then at the third or fourth meal, WHALLAH, they were gone! He ate them! I'm going to have to start trying that trick on other foods. :) 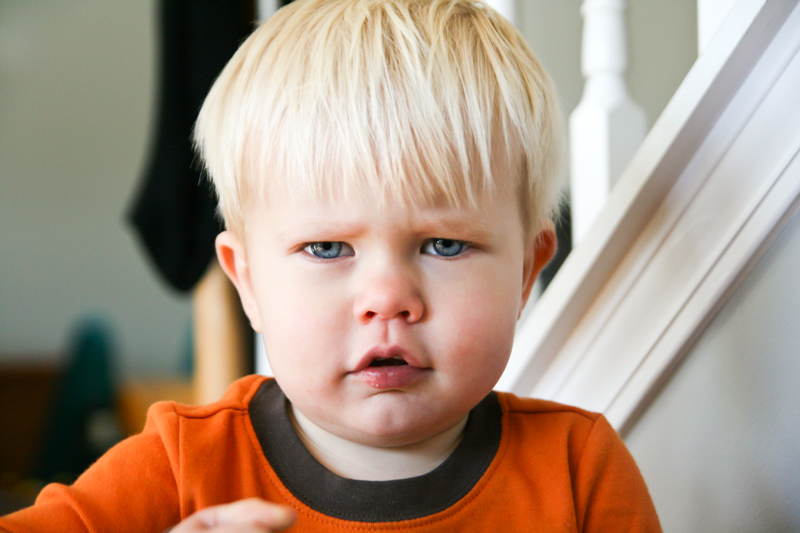 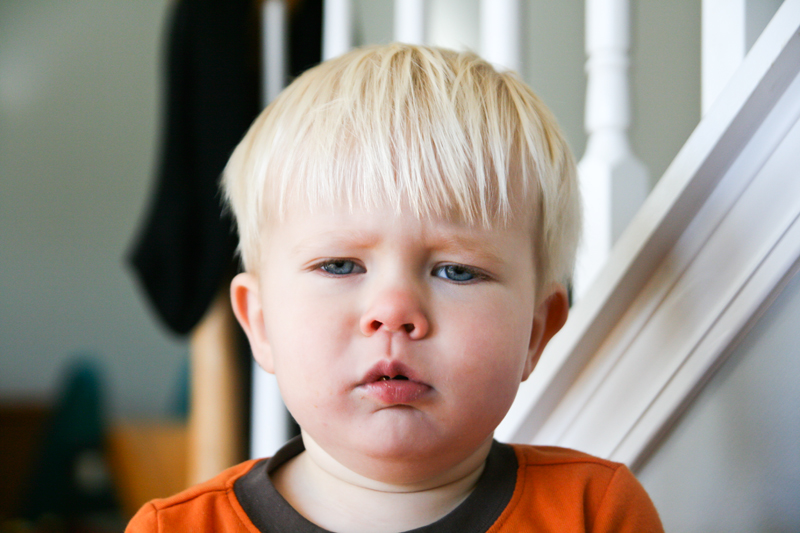 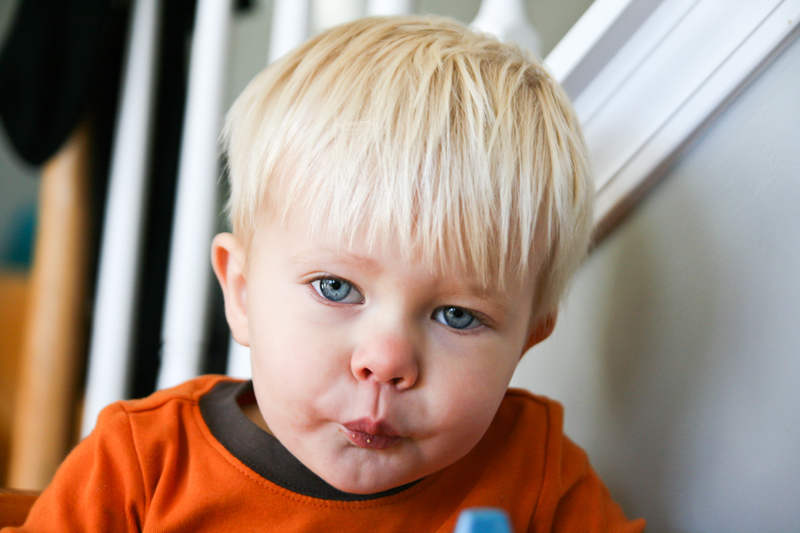 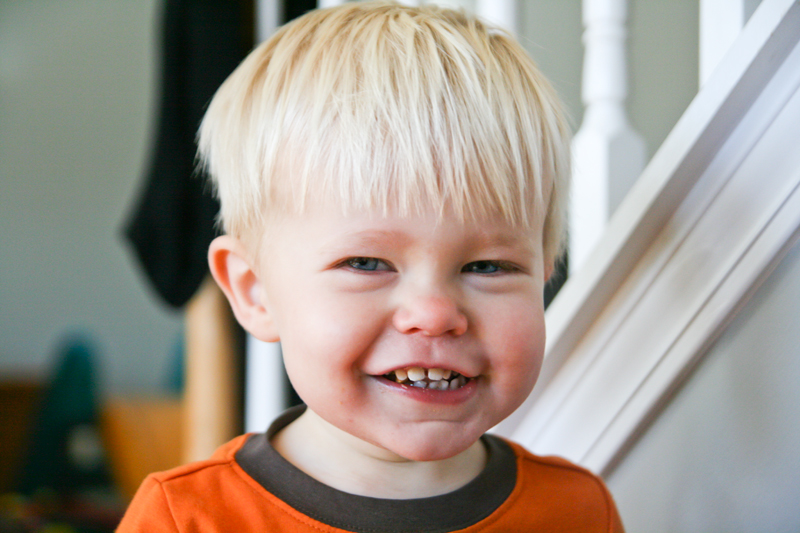 Speaking of food, Krew will NOT let anyone feed him anymore. Which means meals typically take twice as long and are four times as messy. But hey, I guess I should be glad he's learning to be independent. :) 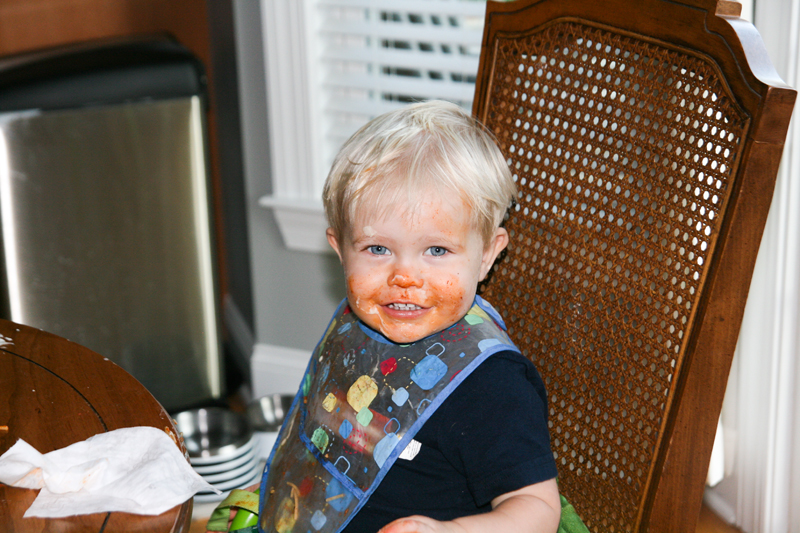 Daddy is still his favorite person, although in the past two months he has started showing me a bit more love. There have been a couple times where he's requested me over his dad, which makes me feel SOOOOOO good. (No offense, Dave.) It's still a rarity though.  He still prefers grandpas and uncles over grandmas and aunts, too. Which, a friend pointed out to me, is a good thing, because it means he's relating to men. I'd never thought about it with that positive spin, and it made me feel a bit better.

Have a Merry Christmas!