Not Your Typical [Second] Baptism Story

Yesterday I got baptized. Again.

To be honest, it wasn't something I wanted to do. But sometimes God gives you instructions and you just have to follow because that's what His followers do.

I was baptized as an infant and had always considered that to be sufficient. But since giving my life to Christ a little over six years ago, the concept of a believer's baptism by immersion had been emphasized to me over and over and over again.

The problem? A) I wasn't convinced that it was necessary and B) The idea of doing it made me very, very uncomfortable.

It took a long, long time for me to get past these two barriers.

As for A), I'm still not convinced it was necessary. However, many people think it was and is. I'm a follower of Christ, I know that in my heart regardless of whether or not I was dunked in water. But part of following Christ is doing what He says and following His example. Many people believe that truly following Him includes being baptized by immersion after giving your life to Him. Therefore, regardless of whether or not it truly was necessary, doing something as simple as a baptism in order to ensure that without a doubt I'm following His will seemed like the right thing to do. So I decided I should probably do it, just to make it clear that I truly am His.

Then we hit B). The discomfort. I can't explain why it made me so uncomfortable, but it did. Perhaps it was all the people. Perhaps it was just the weirdness of it - being dunked in water, that's kinda weird, right? Perhaps it was because it felt so ritualistic. Perhaps it was all the attention received because of it. Whatever the case, the idea of it - and even actually doing it - made me super uncomfortable. So prior to yesterday, I avoided anything that had anything to do with baptism like the plague. The idea of it made my stomach churn. It was this thing that I thought I should probably do, but the thought of doing it made me feel so nervous and anxious that I could hardly breathe.

That brings us to yesterday. Sunday. I woke up in the morning exhausted. Dave offered for us to stay home from church and listen to a sermon online so I could get more sleep, but I said no, we should go to church. Had I known it was going to be a baptism Sunday, I can absolutely guarantee you that I would have climbed back in bed. But God had other plans.

So we get to church, we sing our music (my favorite part). I'm listening to the first five minutes of the sermon and I'm noting that Pastor Steve doesn't have his usual stand with notes and iPad in front of him while he speaks. In fact, it's no where on stage. Weird.

Then Dave leans over and points out to me that there is a tub on the stage.

My heart drops. Baptisms. Oh no oh no oh no.

So my thoughts start running. I'm barely listening to the sermon. I'm thinking up all the possible reasons that today is not a good day to do it. I'm convincing myself that perhaps there are some planned baptisms that he's going to do, that he's not going to offer it to the congregation so there will be no pressure. I can barely focus. I have a lump in my throat.

Pastor Steve speaks for about 15 minutes, and then makes the announcement I didn't want to hear. He's going to offer the opportunity to get baptized to anyone who wants to do it.

I really couldn't come up with any good excuses not to do it. I had time after church to clean myself up. Church staff were standing by with towels and dry clothes for us afterward. I didn't have to say anything to anyone other than the pastor, no speaking in front of large groups. None of our close friends had come to church that service, which although to most people would be a bad thing, to me was positive because it was less pressure and less of feeling in the spotlight. The tub wasn't up on a giant pedestal, but rather just on the stage, so although there would be maybe a thousand people in the room, not all of them would be able to see me.

The only excuse I had left in my head was that climbing in the tub in my church clothes was just a bit ridiculous. Then Pastor Steve announced to us all that we shouldn't feel weird about getting wet in our church clothes, and to break the ice he climbed in and dunked himself first.

Crap again. All my excuses were gone.

The lump in my throat had turned into wet eyes and a sob waiting to escape. I knew I had to do it or I would be crying the rest of the day. I knew God was telling me that now was the time. I saw maybe two people heading to the stage, and then I poked Dave to tell him to let me out of the row and said, "I'm going."

He asked if I wanted him to walk me up, and it was all I could do to squeak out a "No." I had to go now, without talking, without thinking too much about it, or the moment might pass and my anxieties might take over and then I'd be sitting on the sidelines crying and unbaptized and feeling like a wuss of a Christ follower.

So I walked up. They had someone standing at the stairs to put hands on me and comfort me while I waited my turn. They took my shoes for me. When it was my turn, which didn't take long since I was maybe the fourth person, I climbed up and I saw Pastor Steve's face recognize me and I said a quick prayer that he wasn't thinking to himself, "Wait, doesn't she lead a life group?  Isn't she supposed to have already done this?" I'm sure he was just excited and happy, which is what his expression said, but of course those thoughts ran through my head anyway.

So I climbed in the tub and sat down, and the chilliness of the water took my breath away and I let out a "Whew!!" Pastor Steve laughed and said, "It's going to be memorable, huh?" I was like, "Yup!" Then he said "I baptize you in the name of the Father, the Son, and the Holy Ghost," and under the water I went.

I came up from the water, out of breath from the coldness of it, and people were clapping and Pastor Steve gave me a hug and others were right there with towels for me. I was ushered out of the auditorium and met by a super cheerful group of people giving me hugs and pats and handing me a Bible and taking my name and sending me off to the women's bathroom for dry clothes. Dave was standing nearby with a grin on his face. It was all so fast and overwhelming and surreal.

And afterwards I just felt relief. I had done it. I had obeyed.

I know this isn't your typical baptism story - usually baptisms seem to be preplanned and exciting, joyful times that people look forward to. But for me, baptism was hard. It made me uncomfortable. It gave me stomach aches and tears. But it was what I needed to do to ensure I was truly following God's will. So I did it.

And now it's done. Praise the Lord. I have been baptized. And now the next time there's a tub on stage, I won't have a churning stomach and anxious tears in my eyes. Because I obeyed. 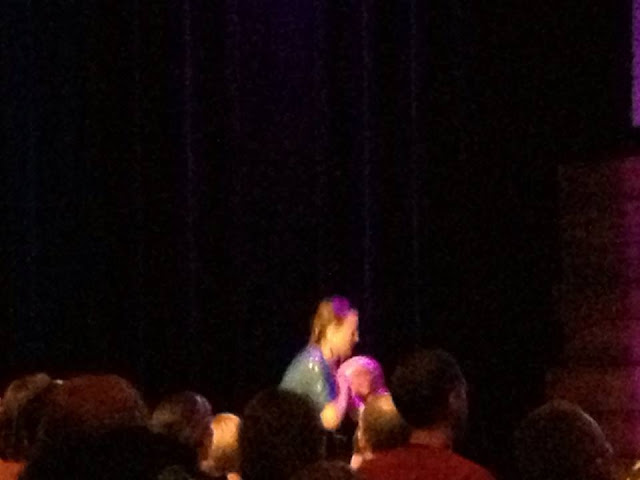 Email ThisBlogThis!Share to TwitterShare to FacebookShare to Pinterest
Labels: {Faith and Inspiration}, {My Life}